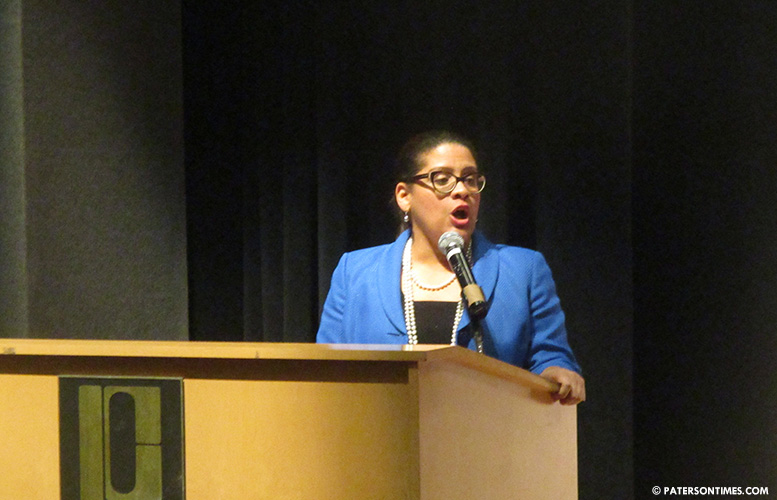 Passaic County prosecutor Camelia M. Valdes held a discussion on identifying, reporting, and preventing hate crimes at the Passaic County Community College earlier in the month. She had three panels that included law enforcement officials, resource organizations, and community leaders to address each facet of the subject.

Some on the panels cited the recent carnage at the Tree of Life Synagogue in Pittsburgh, Penn; white supremacist violence in Charlottesville, Va; a threat to blow up a mosque in Florida; and assault threat against a person based on sexual orientation in Texas.

The panel of law enforcement members at the forum on hate crime held at the Passaic Community College on Dec. 4.

“We are focusing on what each and every person can do when faced with these disreputable acts,” said Andrea Johnson, outreach coordinator for the U.S. Attorney’s Office for the District of New Jersey. “We must uphold civil rights and combat hatred and bigotry, from mass murder, to physical threats, to crimes that are perpetrated by criminals to target people because of who they are, where they worship, and who they associate with.”

Valdes (pictured) said bias incidents are down in Passaic County. She said from Jan. 2018 through Sept. 2018, there were 18 reported incidents, down from 25 during the same time last year. She said there have been a total of 43 hate incidents in 2018.

But hate crime has been increasing in New Jersey and the United States. Almost 500 hate crimes were reported in 2017, a 76-percent increase from the previous year in New Jersey, according to data released by the FBI last month.

Panel of community leaders at the forum.

New Jersey’s definition of hate crime involves a person who “commits, attempts to commit, conspires with another to commit, or threatens the immediate commission of an offense with the purpose to intimidate an individual, or group of individuals, because of race, color, religion, gender, disability, sexual orientation, gender identity or expression, national origin, or ethnicity.”

Mayor Hector Lora of Passaic City said hate crime leaves a “lasting effect upon a community” citing incidents like swastikas painted on the outside of synagogues. He said more needs to be done to encourage immigrants to report hate crime incidents.

Many incidents are not dealt with because immigrants feel “helpless or that they will be deported,” said Lora.

“When a hate crime occurs to one of us, it happens to all of us,” agreed Kenneth Clayton, president of the Paterson NAACP.

The panel of representatives of resource organizations at the recent forum on hate crime held at the Passaic Community College.

David D’Amico, chief investigator for the Middlesex County Department of Corrections, Camp, and Youth Services, said that not reporting a hate incident results in escalation and increase of crime severity as well as emboldening perpetrators. He said that those who testify against committers of hate crimes are often subjected to intimidation and must be protected.

“If you see something, say something,” D’Amico said.

Passaic County residents should report bias and hate crime incidents to their local police or the prosecutor’s office.