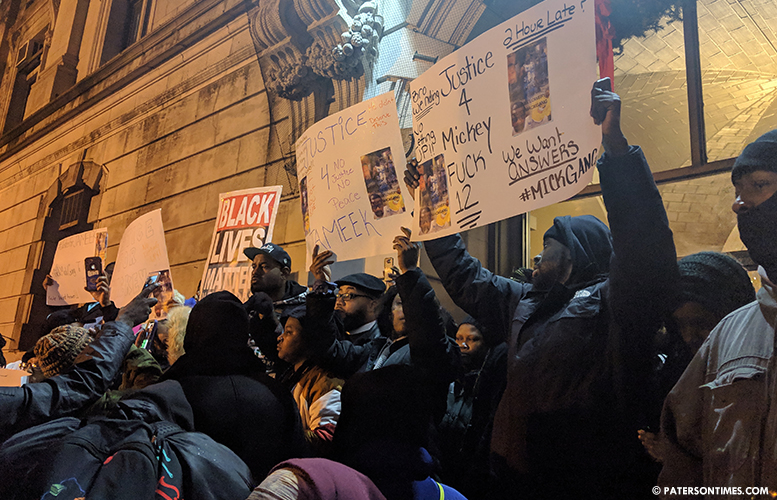 The death of 27-year-old Jameek Lowery sparked a large demonstration in front of City Hall on Tuesday afternoons.

Protesters chanted “No justice, no peace” while holding up signs that read “He asked for help,” “Justice 4 Mickey,” and “We want answers.”

Minutes after about 200 protesters gathered outside City Hall, Passaic County prosecutor Camelia Valdes released some details of the incident that ultimately led to the death of King’s son.

A preliminary investigation revealed Lowery called 911 from his home on Godwin Avenue at about 2:45 a.m. on Saturday. He told the operator he had taken ecstasy and was paranoid. An ambulance responded and transported him to St. Joseph’s Regional Medical Center.

Lowery became erratic at the hospital and left.

At about 3:42 a.m., Lowery called 911 and stated people were trying to kill him on Broadway and Memorial Drive.

Three minutes later, Lowery entered the Frank X. Graves Public Safety Complex. He live streamed a video on Facebook where he says some people, including police officers, were trying to take his life.

“Police used physical force and compliance holds to secure Mr. Lowery in the ambulance,” read the statement from the prosecutor. “Hospital records indicate no acute trauma.”

“He was badly beaten,” said Lowery’s aunt Monique James at the demonstration outside City Hall.

Valdes in her statement said the cause of the death will be determined by the New Jersey Regional Medical Examiner’s Office.

Lowery left behind three children, two boys and a girl, according to his mother.

“The Passaic County Prosecutor’s Office is fully investigating every step of the series of events on Saturday evening, interviewing police and fire officers as well as medical professionals at St. Joseph’s University Medical Center. They are also awaiting the results of toxicology and autopsy reports,” said mayor Andre Sayegh on Tuesday afternoon.