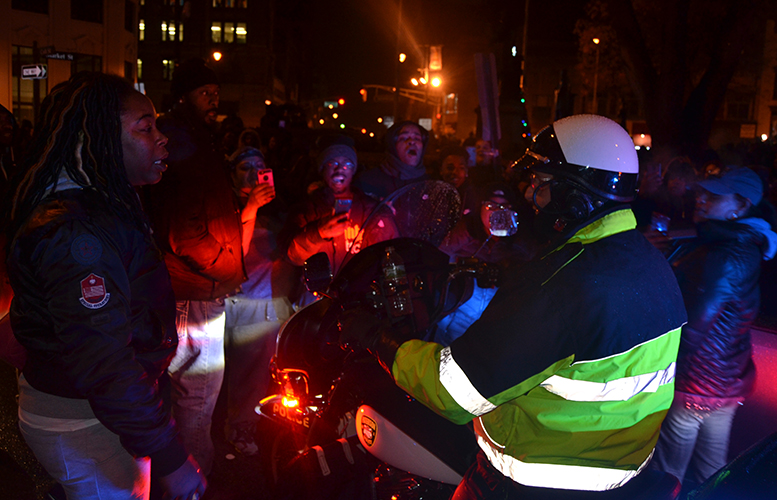 A contingent of demonstrators protesting the death of 27-year-old Jameek Lowery attempted to breach the barricades outside the Frank X. Graves Public Safety Complex on Tuesday night prompting police to use mace.

Teague was among 200 people to protest the death of Lowery. The crowd gathered outside of City Hall on Tuesday afternoon. Following speeches and chants, the group walked three blocks to the police station.

“I even got some of it,” said Teague, a former school board member.

“They just maced all of us,” said Zellie Thomas, leader of the Black Lives Matter in Paterson, in a live streamed video on social media, “for no reason.”

Thomas helped his fellow protesters by pouring water over their eyes to blunt the effects of pepper spray.

Some of the protesters confronted police and hurled verbal abuse at them, said Teague. Some protesters threw bottles at police officers. He had a microphone and a speaker that he used to urge calm.

“When I saw them moving towards a fight, I jumped out. I didn’t want it to escalate to where people get hurt,” said Teague. “I wanted to make sure everything was peaceful out there.”

Teague tried to steer the crowd back to City Hall. Outside the City Hall building police set up barricades and blocked off some of the streets. There was heavy police presence in downtown Paterson.

Inside City Hall, Lowery’s family members, including his mother and father, demanded answers. His mother, Patrice King, wanted to know how her son died.

Municipal officials told King the answers would follow the completion of the investigation by the Passaic County Prosecutor’s Office.

King told municipal officials she did not have confidence in law enforcement. Some family members wanted the investigation moved out of Passaic County.

“I want to take it out of here. They are hiding a lot of the stuff under the rug,” said the mother. “I need answers. I don’t think I’m going to get a fair one.”

Lowery called 911 and had an ambulance take him to the hospital early Saturday morning.

“I think I took too many e-pills, ecstasy pills,” Lowery tells the operator at about 2:45 a.m., according to 911 recordings obtained by the Paterson Times.

“And what’s going on with you?” asks the operator.

“I’m paranoid,” he tells the operator.

At the hospital he became erratic and leaves, according to authorities.

“Help me! I need help,” he told the operator. He said people were trying to kill him on Broadway and Memorial Drive.

At about 3:45 a.m., Lowery, heavily sweating and frantic, entered the police station. He streamed a video over Facebook from the front desk of the police headquarters.

“They are trying to kill me,” Lowery is heard saying. “They’re trying to shoot me they selves. I’m good. I’m just paranoid.”

A police officer shines a flashlight to check. “Ain’t nobody there,” an officer tells him.

Lowery also sought a drink of water. He was foaming from the mouth and police told him they could not provide him water. Someone tells him there’s water at the hospital.

“Please don’t kill me,” he is heard telling the operator.

An ambulance arrives at 3:55 a.m. He gets on the ambulance and is taken to the hospital in under five minutes. When he arrives, he is unresponsive, says a hospital report. His family members suspect foul play in the ambulance that led to Lowery’s death.

Police used physical force and compliance holds to secure Lowery in the ambulance, according to information released by the Passaic County Prosecutor’s Office. Lowery’s family says he arrived at the hospital with bruises.

His aunt, Monique James, claims Lowery was beaten up inside the ambulance. He had bruises when he arrived at the hospital, said the family.

“All scans were negative for any acute traumatic injuries,” reads a hospital report.

“They’re going to kill me in that ambulance,” Lowery says in his live streamed video. “If I’m dead by the next hour or two, they did it.”

The cause of his death will be determined by the New Jersey Regional Medical Examiner’s Office, said the prosecutor in her statement.