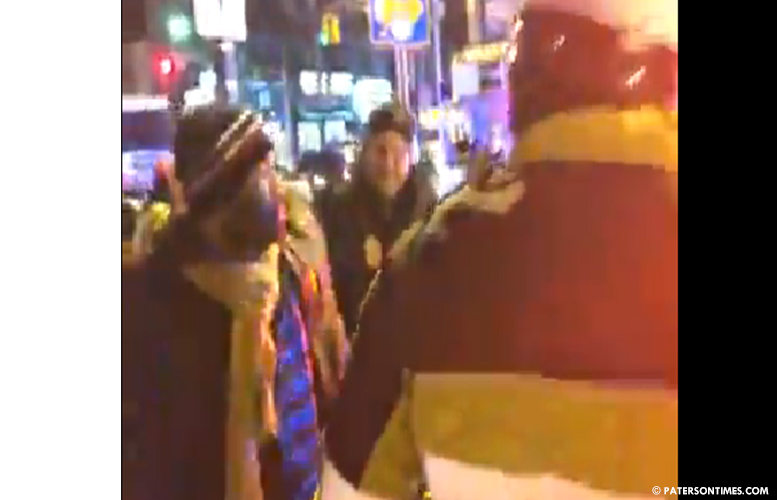 Police arrested two men from a group of people protesting the death of Jameek Lowery at City Hall in downtown Paterson on Friday night.

Zellie Thomas, leader of the Black Lives Matter in Paterson, organizer of the protest, is seen being placed in handcuffs in a video posted on social media.

Hawk Newsome, of Black Lives Matter greater New York, was also arrested, according to one person who attended the protest, fourth this week following the death of Lowery early Monday morning.

“They arrested them because they were in the street,” said Emanuel Capers, who was present at the protest.

Mayor Andre Sayegh on Friday night said both protesters are being released.

Both were charged with disorderly persons offense, said the mayor. He said police asked the protesters not to block traffic in downtown Paterson by getting into the streets.

“We marched down Market Street. When we got to the corner, the police just came out of nowhere. They grabbed Zellie and they grabbed Hawk and put them in the back of the truck,” said Corey Teague, who was at the protest. He said both were targeted because they were the leaders of the protest.

Fewer than 100 people attended the protest on Friday night.

“They targeted us two because were leading the rally,” said Newsome in a live video on Facebook from inside of what appears to be a holding cell. He urged supporters to contact the mayor and police to release both men. “This is outrageous. This is what they do to people who fight for civil rights. They try to jail us. They try to scare us, but we’re not going anywhere.”

“As soon as the people began to walk, they came, man, from every direction on motorcycles and gear. They ran down on people on Market Street between Main Street and Washington [Street],” said Bilal Hakeem, who was present at the protest. “What they have been detained for? I don’t know.”

Hakeem said there wasn’t the heavy police presence that existed on the first day of protest. He said protesters called police “pigs” and yelled “f— the police” at the demonstration, which was much smaller than Tuesday night, when more than 200 people protested.

Some of the protesters crossed a barricade on Tuesday night after throwing bottles and spitting on police outside the Frank X. Graves Public Safety Complex. Some blocked police motorcycles, flipped steel barricades, and broke the front window of the police station, said Speziale. Police used mace to control the crowd.

“They were very peaceful there. No throwing of anything,” said Hakeem of Friday’s protest.

Thomas led the crowd in chanting “No justice; No peace” from the steps of the historic City Hall.

“If we don’t get no justice,” Thomas said to the crowd.

“There ain’t going to be peace,” the crowd yelled back.

Protesters have been out on the street since Tuesday, a day after Lowery was pronounced dead.

Lowery took “e-pills,” ecstasy pills, and called 911 early Saturday morning. He was taken to the hospital. He left the hospital and called 911 again from Memorial Drive and Broadway before heading to the police station. At the headquarters, Lowery lived streamed a panic-stricken video claiming people were trying to kill him, including police officers.

Police called an ambulance to transport him to the hospital. He was restrained using physical force in the ambulance. He arrived unresponsive at the hospital and died early Monday morning.

Lowery’s family has been demanding answers from officials. His mother, Patrice King, wants to know what caused her son’s death. She has said he was fine when he left the police station to enter the ambulance, but return to the hospital unresponsive. Lowery had been suffering from suspected spinal meningitis.

“I’m pushing every agency for answers. It’s going to take time,” said Sayegh. An autopsy is being done to determine the cause of Lowery’s death, according to Passaic County prosecutor. “People have to be patient and be peaceful above everything. Protests have to be peaceful.”