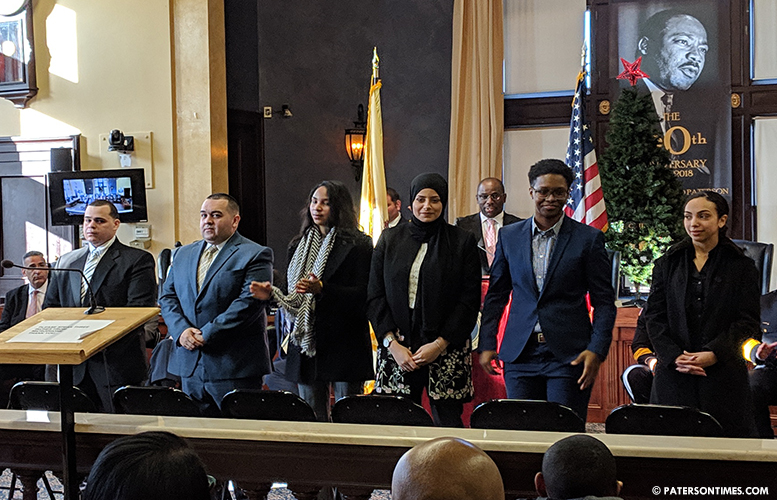 Mayor Andre Sayegh swore in six new police officers on Monday morning. He described the class, which included a Muslim woman clad in a hijab, as reflective of the community at a time when police have been the target of protests and threats.

“This is quite a class. You are a reflection of our population,” said Sayegh. “We have a young lady here who has a hijab.” He referred to Serein Tamimi joining the police force as “groundbreaking.”

Municipal officials often boast about the dozens of ethnic groups that call Paterson home. Four of the six recruits were women, the mayor noted.

Sayegh urged the officers to get to know the residents, whose tax dollars pay for the salaries and benefits of more than 400 police officers.

“Today is the first step to a very long journey,” said police director Jerry Speziale. All six will begin six months of training at police academy on Friday. He told the new officers not to “demean” or “betray” the trust placed in them.

Police had a tough year in 2018, when five officers were arrested by the Federal Bureau of Investigation (FBI) for demeaning and betraying their department. These men’s actions have cast a shadow on the police force as protests rocked the city last week. Many demonstrators cited the five arrests to attack police officers.

Few of the demonstrators noted the five arrests resulted from police brass referring the case to the FBI for investigation.

“Serve each and every day of your career with courage, honor, and dignity,” said Mason Maher III, president of the Superior Officers’ Association, to the recruits.

The police force had 418 officers last year, but this year more than 70 of them are expected to retire.

Speziale said the city is preparing to hire 30 new officers this year. Municipal officials said police will be able to hire a new recruit for every veteran officer that turns in papers for retirement.