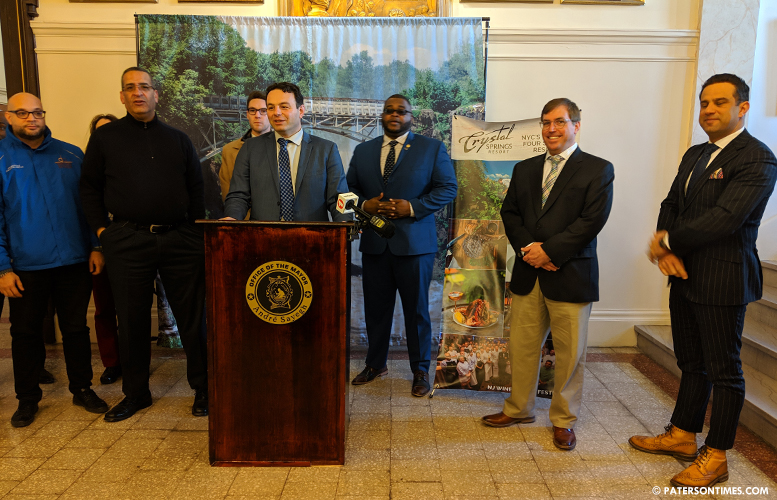 A Sussex County resort plans to fill 30 seasonal jobs with Paterson residents. Hired residents will be provided transportation from downtown Paterson to their work destination 30 miles away in Hamburg.

Crystal Springs Resort, which has a more than 4,000-acre resort in Sussex County that offers golf, spa, dinning, and much more, wants to fill the positions within a month, said its chief operating officer Robby Younes (pictured, far right).

“We hire approximately 500 employees seasonally throughout the year,” said Younes on Wednesday morning. “Our season starts from May to October. Obviously, we’re in the winter season right now so we’re starting with 30 people. We’re the biggest resort in New Jersey.”

Jobs are in areas of culinary, hospitality, accounting, and sales, he said. Jobs pay a minimum of $10 per hour, said Mike Powell, economic director for Paterson.

20 people have already submitted applications for the jobs, said Powell. He wants to drive down the city’s unemployment rate which stood at 6.3-percent in October, almost twice the New Jersey average of 3.6-percent, according to the Bureau of Labor Statistics.

Powell said mayor Andre Sayegh and Younes have known each other for years.

“He needed to hire hospitality employees for his four-season resort just 30 miles from Passaic County, so we connected him with the Passaic County Workforce Development Board, just a few blocks away here in Paterson,” said Sayegh. “I am delighted that these culinary and hotel operations jobs are the first of many opportunities that will open for Patersonians at Crystal Springs. And they will provide transportation for employees to get to work, removing one of the major hurdles for our residents.”

Sayegh said he met Younes in 2003. At the time, Younes owned a business in South Paterson.

Sayegh said Younes reached out to him after he became mayor and told him he has positions open to hire Paterson residents. The mayor said he jumped at the opportunity to get Patersonians working.

It’s been tough to find workers in the current economy. Unemployment is the lowest it has been since the 1960s. Just today, the U.S. economy beat expectations, yet again, in adding jobs, according to data from payroll processing firm ADP.

“We were bringing workers from overseas and that’s called insanity,” said Younes. His firm has changed strategies to recruit from the region. “We are trying to support local cities and towns.”

For more information or to apply visit https://www.crystalgolfresort.com/PWDP.