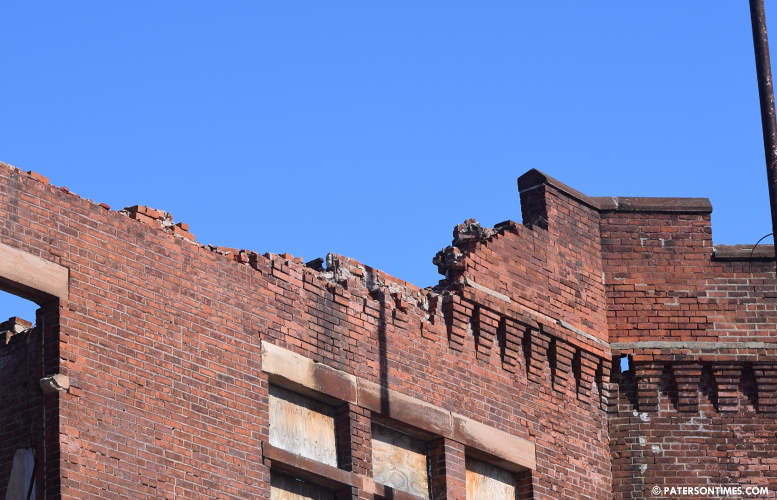 After the recent collapse of the Paterson Armory’s parapet wall, the city has declared the structure an “imminent hazard” and is moving to demolish the remnant of the 19th century building.

“We have to demo it,” said economic development director Michael Powell on Thursday afternoon. He said the structure was declared an imminent hazard by the city’s construction official. “What we’re doing is trying to figure out what we can do from the demolition perspective to save some of the architectural elements.”

Powell said the city is putting the job out for bids. He said demolition is likely to take place next week.

Much of the Paterson Armory was demolished in the aftermath of a massive fire in Nov. 2015. The city spent $1.1 million to demolish, secure the structure, undertake environmental remediation of the building, and conduct preliminary costs analysis to reconstruct the front administration portion of the historic building for housing or office space.

Some recently wondered whether the structure was properly secured following demolition in 2015.

“It was stabilized and lasted the last four years,” said Powell. “It’s just a culmination of unfortunate events. It was negative 10-15 degrees and then it goes to 60 degrees that destroys, water contracts and expands, it does it massively, so the parapet didn’t have a chance.”

In 2017, the city wanted to spend $900,000 to rehab what remained of the Paterson Armory, but the City Council refused to appropriate funds. Some council members at the time said the amount was not enough to fully rehab the building.

Seven months ago, the city agreed to sell the building to developer Charles Florio for $3 million. Florio presented an ambitious plan to construct a six-story building that will contain 138 luxury apartments and 10,000 square feet of retail space for $20 million.

Florio at the time promised to preserve the face and wall of the armory.

The city and Florio have yet to close on the deal. Florio made a $300,000 deposit to the city.

“It doesn’t reduce the value for me. It gives an added expense to the city,” said Florio referring to the demolition cost. “We did everything we could do. We’ve been struggling to get a date with the Board of Adjustment.”

Powell did not have an estimated cost for the demolition. He said the cost will be known when the city receives bids. He said the contract will be awarded to the lowest responsible bidder. Some of the funds for demolition could come from the $2 million zero interest loan the city took out through the state.

“It should have been demolished the last time. They tried to salvage it,” said Florio. “Right now, it’s a danger.”

Florio had a structural engineer conduct an assessment of the building. He said the roof collapsed into the second floor. The entire wall is compromised, he said.

“My engineer said you can’t fix this wall,” said Florio. “It’s like you are standing up on two legs and all the sudden somebody cut one of your legs off. You are on shaky ground right now.”