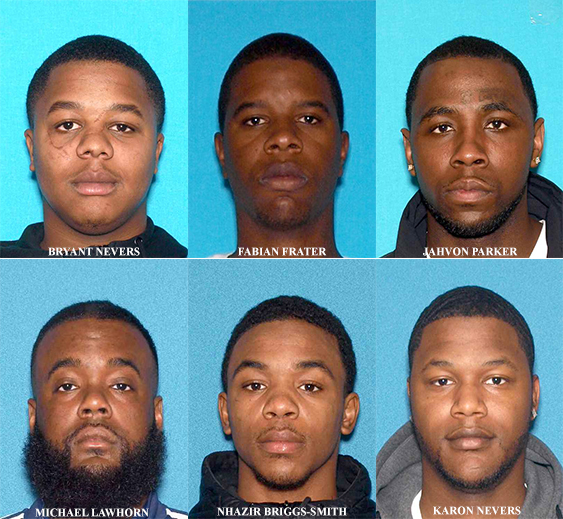 Each of the individuals named in the indictment are listed below:

The alleged gang members are also variously charged with drugs and weapons offenses, authorities said. Ten people who allegedly bought heroin, cocaine, or the anesthetic ketamine, also known as “K,” from the ring have been charged with drug possession offenses.

“In Operation Icebox, we dismantled a narcotics network run by a set of the Bloods street gang that allegedly was dealing large quantities of heroin in a violence-torn neighborhood,” Grewal said. “By taking down these alleged drug dealers in Paterson, which is a heroin distribution hub, we stopped countless doses of heroin from reaching users across the region each week, and we made the city safer by reducing street-level drug dealing and the violence that invariably accompanies it.”

The operation was led by the Division of Criminal Justice Gangs & Organized Crime Bureau and the Paterson Police Department with assistance from the New Jersey State Police and Passaic County Prosecutor’s Office.

Authorities said the So Icy Boys had its base at 10th Avenue and East 28th Street. Besides dealing large quantities of drugs, the gang engaged in street warfare. Two members of the gang were murdered during the course of the investigation. A third gang member was wounded in a shooting that stemmed from an internal dispute.

The non-fatal shooting and one of the murders occurred at 10th Avenue and East 28th Street, authorities said.

“This strategic investigation, conducted in partnership with the Paterson Police Department, targeted a criminal organization that we allege was fueling the deadly opioid epidemic and compromising the safety and quality of life of city residents,” said Veronica Allende, director of the Division of Criminal Justice. “We will continue to collaborate with law enforcement partners in Paterson and throughout New Jersey to fight drug trafficking.”

The accused gang members could face decades in state prison if convicted. Authorities said the indictment was handed up to New Jersey Superior Court Judge Mary C. Jacobson in Mercer County who assigned the case to Passaic County.

The alleged gang members will appear in court at a later date for arraignment, authorities said.