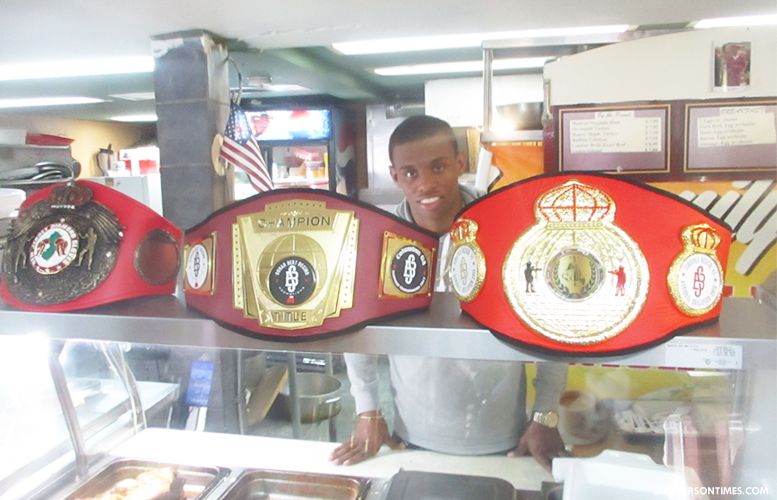 20-year-old John Vallejo got into boxing at the insistence of his brother’s coach. Now, Vallejo is blazing his own trail.

Vallejo, 2018 Diamond Gloves New Jersey champion in the 140-pound weight class, won a number of tournaments, both local and national. He has the belts to prove it.

Recently, he was recognized at the annual New Jersey Amateur Boxing Association awards banquet in Linden for competitive excellence.

His story begins in his last year at Clifton High School.

“During my senior year, I would take my little brother to his boxing lessons at the Jersey Boy Boxing Club in Passaic,” he recalled. “I would stay there and watch him until I had to take him home.”

Vallejo said coach Jose Concepcion started asking him to try his hand at boxing. At first, Vallejo brushed him off. But the coach, who saw talent, persisted. Vallejo eventually agreed to give it a shot.

Vallejo came in dressed to participate.

“That first day was difficult,” said Vallejo.  “After that, I realized it would take me awhile to get in condition. Eventually, I started learning how to shadow box and hit the speed and heavy bags. After that first practice, I was exhausted but I knew that boxing was the sport for me.”

It took a month of grueling training before trainers at the Jersey Boy Boxing Club let him try his hand at sparring.

“The first time I was in the ring, I faced off against a fighter, Glen Tappa, who was six or eight years older than me,” Vallejo said.  “He beat me up a few times, but helped me learn what to do.  He told me I would be good someday and to keep at it.”

From that initial experience, Vallejo’s amateur career has blossomed. Besides the Golden Gloves success, the young fighter garnered first place finishes in national tournaments by travelling to both Georgia and Virginia.  He now sports a 40-2 record. One of his losses was avenged when he topped the previous victor in a rematch.

Vallejo now is employed at Team Machine Deli in Woodland Park which is owned by his parents.  He said he does everything at the eatery and “even cooks a little bit.” Six days a week, after getting off work in the afternoon, Vallejo heads to Paterson’s True Warriors Boxing and Fitness Club to train. Formerly directed by boxing icon Joe Grier, the gym has produced a number of nationally ranked fighters over the years, including world champion Yuri Foreman who held the WBA super welterweight title from 2009 to 2010.

Now under the management of boxing coaches Jose Concepcion and Oscar Suarez, Vallejo described his training routine at True Warriors.  He arrives each afternoon a 4 p.m. and leaves at 8 p.m.

“I jump rope, hit the heavy and speed bags, and do pad work,” Vallejo explained.  “Then I do ab work like sit-ups and crunches, pull-ups on the bar, and finally knee and leg work before I cool down.”

Vallejo said he spars on a regular basis which involves eight three-minute rounds.  He also emphasized that, “everything I do, I do for God.”

“John calls me before every one of his matches and we pray together,” said LaLuz.

The boxer lived half of his life in Paterson. He was born in New York City and raised in the Bronx.

When he was 12 years old his family moved to Paterson.

Vallejo’s next challenge will be the New Jersey Golden Gloves Tournament in March. State winners move on to participate in national competition.

At the New Jersey Amateur Boxing Association awards Vallejo was among some big name boxers. A number of iconic pugilists from the Garden State, including Frankie ‘The Shark’ Toledo, were honored for lifetime achievement at the dinner.

Toledo was inducted into the New Jersey Boxing Hall of Fame in 2006.