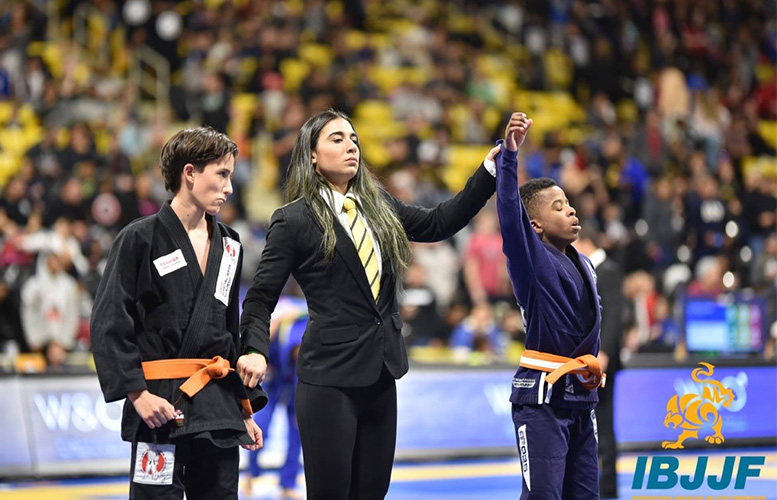 Mitchell traveled from Paterson to Long Beach, Calf. to compete. He won the match on Sunday, Feb. 17, 2019. He competed in a challenging bracket this year after becoming an orange belt, said his father, Naji Mitchell, because the group included multiple returning Pan Kids medalists.

Over 1,700 registered competitors attended the tournament from across the world, said the father.

“To win the largest kids’ martial arts tournament in the world for the second year in a row is an amazing accomplishment because he’s not taking kids by surprise anymore. They know who he is and he’s still able to be successful against the highest level of competition from around the world,” said the young star’s father.

Mitchell (pictured, right) and his brother, Jason Dixon, have brought home gold and silver medals over the past years.

“He sustained an injury in football in late fall,” said his father. But that hasn’t stopped him from preparing for the next fight. “He’s training.”

“I’m proud of both of my boys. They train very hard,” said the boys’ mother, Tracia McDonald. “They put their best on the mat. It’s a lot for them.”

The boys train 3-4 times a week. Both boys are excelling not only in jiu-jitsu, but also in school.

The boys mostly have A’s and B’s in their report cards, said their mother.

“We never have any complaints from their teachers,” said McDonald.

Mitchell is in the 6th grade at School 25.

His father said this year was extra special because the boys’ dojo, Unity Jiu-jitsu, now operates out of South Paterson. Previously, the academy operated out of Totowa. It is led by instructor city resident Devonte “Bones” Johnson.

The next major competition is the International Brazilian Jiu-Jitsu Federation (IBJJF) Kids International in Las Vegas this summer, said Mitchell.