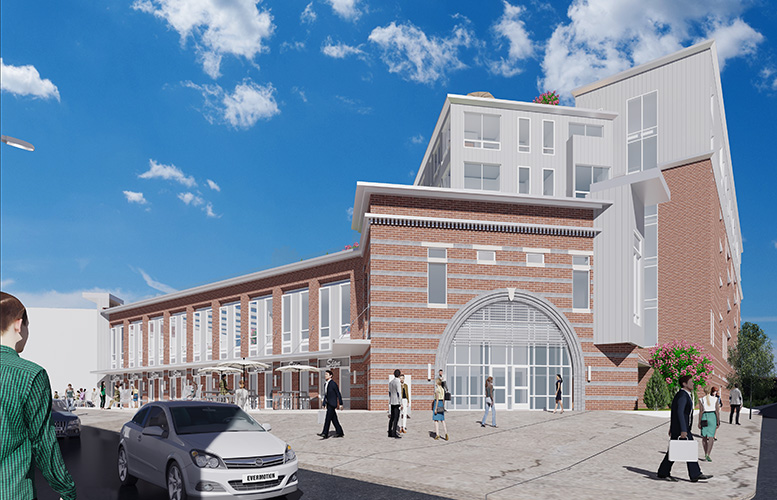 Prominent developer Charles Florio, forced to re-design his luxury mixed-use complex at the site of the Paterson Armory following the parapet wall collapse, unveiled a new design on Monday evening.

Florio’s changed design preserves the semblance of the Paterson Armory by re-creating the iconic archway. He said bricks from the soon-to-be demolished Paterson Armory will be used to construct the new seven-story structure.

Florio said the project will cost $14-15 million and two years to finish. His team presented the project to the Board of Adjustment on Monday night.

Municipal officials are in process of accepting bids to hire a contractor to demolish the crumbling building on Market Street and Rosa Parks Boulevard. A massive fire in late 2015 destroyed much of the 19th century building.

Florio said he still wants to preserve whatever he can of the Paterson Armory.

“With the demise of the building, we had to re-interpret it. Not a complete replica, but taking any elements that could be salvaged,” said Zgoda. “We’ve re-created the archway. This is a smaller scale re-invention of the armory.”

Members of the Board of Adjustment did not have issues with the new design. However, the board’s planner, Gary Paparozzi, clashed with Florio’s team over parking spaces.

The project has 151 parking spaces on the first floor. Florio’s traffic engineer Charles Olivo said that’s adequate for the project.

Ruben said the project does not require a parking variance.

“You are wrong, sir,” responded Paparozzi.

The hearing prematurely came to a halt after almost 1 hour and 30 minutes. Paparozzi had to leave the meeting after getting news that his mother had passed away, said officials.

Councilman Luis Velez, who represents the area where the armory site is located, planned to express support for the project.

“It’s preserving, at least, the history of what was there in the past,” said Velez. He also wants the project to be approved to remove an eyesore in the 5th Ward. “Every plan the city had for this site in the past failed. The community wants to see this development.”