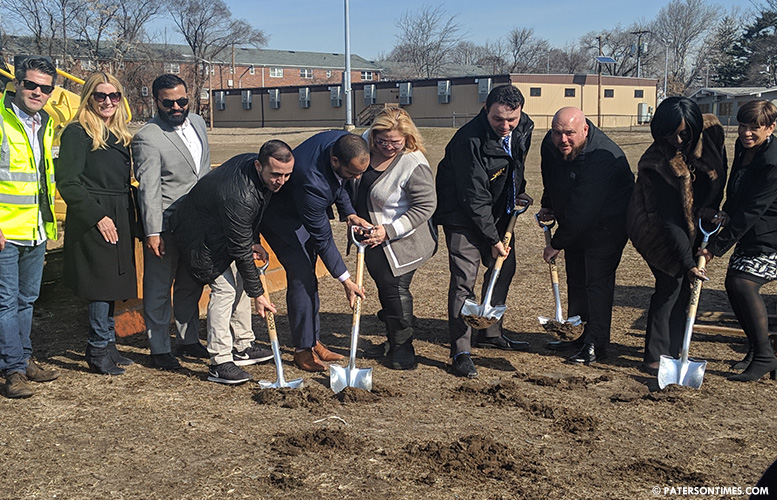 “This field will be top notch,” said mayor Andre Sayegh, who has made fixing parks a priority in his administration. “We believe this will be the talk of the town.”

Work on the field will begin in about two weeks, said Phil Pirro, vice president of Athletic Fields of America of Montville. His firm was awarded the contract for the project last month. He said the field should be completed by mid-July.

“I have been crying for this for years,” said Michael Jackson, 1st Ward councilman. “This is a start.” These investments in recreation for young people will reduce crime in the long-run by providing space for youth, he said.

Members of the City Council convinced the administration to assign borrowed funds to improving fields for young people rather than power wash the historic City Hall building.

“We’re here today to celebrate. This is what government is all about – to come together and make sure we deliver the best possible product for our kids,” said Al Abdelaziz, 6th Ward councilman.

Abdelaziz, who is supervisor of athletics at Passaic City schools, said the original specifications for the field did not accommodate softball. He was told it would cost more, but he called the bluff.

“This is a multi-purpose field. Put everything. This doesn’t cost money. We’re still putting the carpet on – now you’re just changing the lines,” said Abdelaziz. “Instead of green turf, we’re going to put brown for the bases. It’s still the same thing. The brown we’re using over there, just put a patch over here.”

The field will also be used by John F. Kennedy High School’s football team, said officials. The trailers at Buckley Park will be used as locker room space.

Coaches from the school district welcomed the improvements. So did some area residents.

“It’s a good investment because there’s going to be soccer, football, and cricket,” said Imran Hussain, vice president of Bangladeshi-American Sports League. His league plays cricket at Buckley Park in the summer.

Hussain and his group plan to use the field for cricket, he said.

“You see the field. It’s not so great right now,” said Hussain.

The new field will be a boost for the park that has been neglected for years. Municipal officials said new fencing will be installed to secure the field.