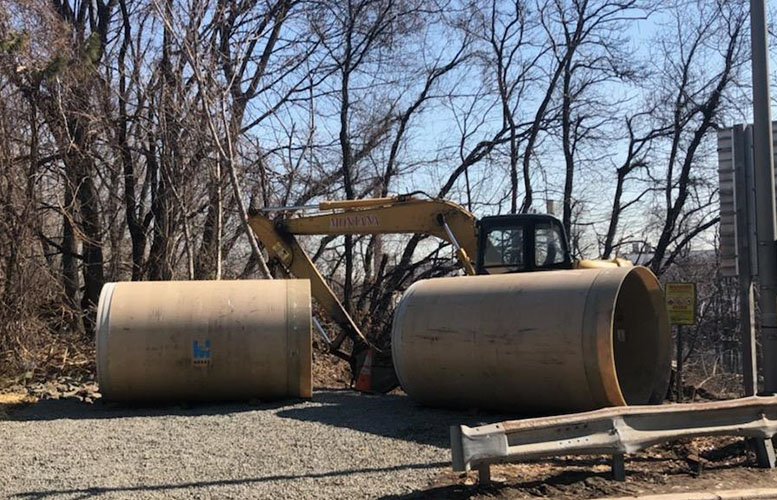 The city has replaced a more than 125-year-old pipe underneath Route 20 to avoid a sewer collapse.

“We averted a disaster,” said mayor Andre Sayegh on Wednesday morning. “If the action wasn’t taken, we were looking at a sewer collapse and a subsequent collapse of Route 20.”

“There would have been sewage in indeterminate number of homes,” said the mayor.

“It could have resulted in sewer overflows going across the highway,” added municipal engineer Fred Margron.

The pipe was originally installed in 1893, said Margron.

“It just was deteriorated because of its age,” said Margron. “We conduct routine inspections of our sewer lines and during one of those inspections we determined it was in a really bad shape.”

Montana Construction of Lodi handled the work over a two-year period. The firm began work in late 2017 and completed most of the work this week.

Margron said the company has some minor work that remains like sealing joints and some grouting.

“I’m glad our sewer operator caught the breaks that he did. It could have resulted in a major, major failure of our sewer system and road collapse. We were able to fix it without any interruptions,” said public works director William “Billy” Rodriguez.

Lilisa Mimms, councilwoman at-large, who lives in the area, said she was happy to see the city caught the problem before it turned into a catastrophe.

“I’m always into let’s do before something happens,” said Mimms.  ”We need to take more preventative measures to prevent disasters.”

The replaced pipe will be good for the next 100 years, said the engineer.