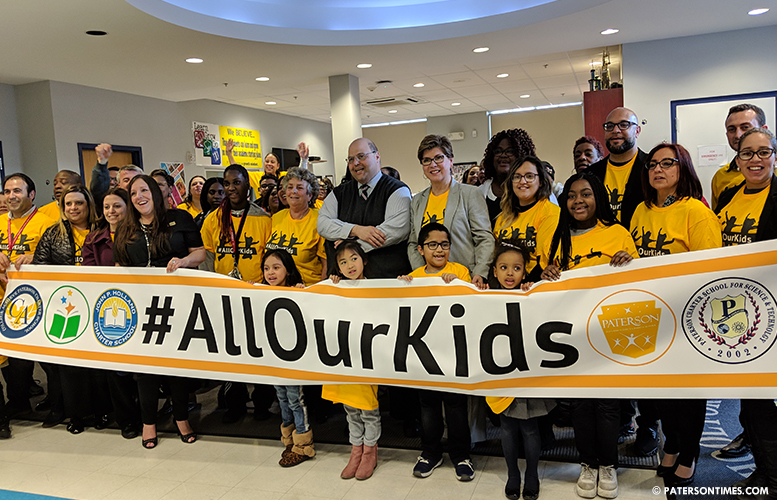 The leaders of Paterson public school district and local charter schools, in a rare and unexpected show of unity, joined forces in a rally on Wednesday afternoon to call on governor Phil Murphy’s administration to provide more education funding to the city.

“This is exactly what we need. We’re all together fighting for the common purpose — that’s adequate funding for all our students,” said Nihat Guvercin, head of the Paterson Arts and Science Charter School. “It really doesn’t matter whether students are attending charter schools or traditional public schools. They are all our kids.”

Superintendent Eileen Shafer, who repeatedly lambasted charter schools over the past month for taking away millions of dollars from the school district, forcing her to potentially layoff 200 staff members, joined the charter leaders.

Clad in a bright yellow shirt, emblazoned in front “#AllOurKids,” distributed by a charter school group, Shafer said she supports the intent of the state’s charter school law.

Instead both sides agreed to host a unity rally.

“We’ve all agreed to advocate collectively on behalf of Paterson’s kids,” said Robert Guarasci, head of the Paterson Charter School Roundtable, a group that represents the city’s six charter schools.

Shafer denied criticizing the charter schools after the rally.

Shafer received applause at the board meeting in March for taking aim at charter schools. Her criticism came at a time half of the city’s charter schools had been dealing with sexual harassment allegations against some of their leaders.

“They are taking the money from our school district, giving everything charter schools need, and our children are left with the minimum that doesn’t provide a thorough and efficient education,” Shafer said at a March meeting.

Riza Gurcanli, principal of Paterson Charter School for Science and Technology, said when he heard about Shafer’s criticism he thought, “we need to better communicate with them.”

“Now, I think it’s accomplished that we’re all on the same page,” said Gurcanli after the rally.

The district received $13.23 million more in state aid for the next school year, but much of it will be sent to charter schools. School officials said $63.8 million will go towards charter schools, up $9.42 million from the last budget year.

Shafer faced a $22 million budget gap. Her staff balanced the preliminary budget by cutting 232 jobs and eliminate programs put in place last year to improve academics in the district.

Keisha Smith, a parent, said she was disheartened by the “us versus them rhetoric,” but was happy to see officials from the district and charter schools in the same room.

“It makes me very proud and happy to see all of you here. It gives me hope for all of the children that are in the city,” said Smith. She has two children — 8th and 10th graders – enrolled in the Paterson Charter School for Science and Technology.

Smith was among 50 people to attend the rally. State senator Nellie Pou and assemblywoman Shavonda Sumter also attended the gathering.

“We want to show that we are all here for the kids,” said Gurcanli, principal of Paterson Charter School for Science and Technology. “There is no friction. We’re all together.”