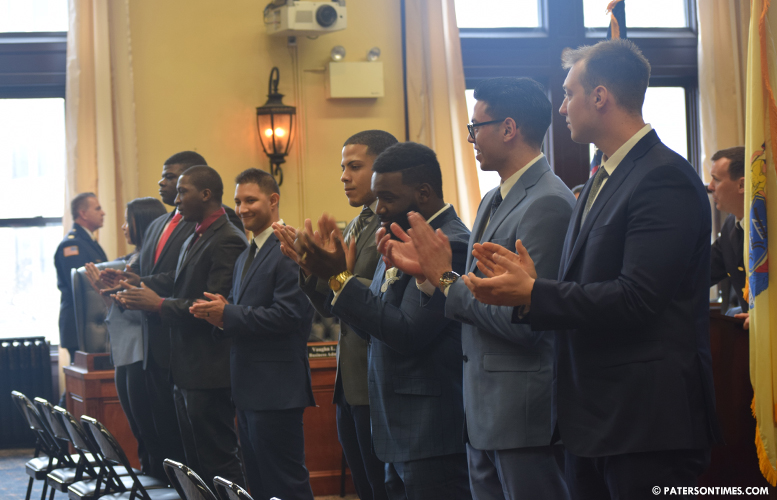 Sayegh nicknamed the class of seven men and one woman the “great eight” for making it through an intense screening process.

Municipal officials had 19 openings for which 75 candidates were certified — only 8 were picked.

“You are the best of the best. We had 19 openings. We didn’t hire 19. We hired you,” said police chief Troy Oswald to the recruits seated in a row inside the City Council chambers. “You have been taught certain things by your families and you bring those virtues here today. I want you to keep those virtues.”

“You must live, both publicly and privately, in a way that neither demeans nor betrays the very trust placed in you,” said public safety director Jerry Speziale. “For the police to have any authority over the community they serve, the people must believe your motives remain principled and your character is unquestioned.”

Speziale said police legitimacy is established through fair treatment. Speaker after speaker urged the new recruits to serve with integrity and never to go astray.

“Right now, it’s a tough time to be a police officer in Paterson,” said Maritza Davila, president of the City Council. “It’s tough, but you guys are up for the challenge.”

Six police officers were arrested in an FBI investigation for violating people’s civil rights. Two have been sentenced to federal prison. Police were also the target of repeated protests following the death of Jameek Lowery.

You are not entitled to anything just because you wear a badge, said McKoy.

“You have to earn it from the people you serve every day. If you become complacent, you become entitled, and then you become arrogant,” said McKoy, who previously served as director of the Criminal Justice Division under the New Jersey Attorney General’s Office. “We’ve seen some behavior of some arrogant police officers who done the people up here – everybody that wears that badge – a disservice. Don’t let that be any of you.”

The eight recruits will spend the next six months in the Passaic County Police Academy starting next Monday, said the chief. He said the officers will be deployed in September.

With the new recruits, police will have 404 officers, down from 418 due to retirements and loss of officers due to the federal investigation.

“Now more than ever, we’re all being tested. So that we could be trusted. All of us need to be trusted. So that those we protect and serve know that their faith in all of us will be restored,” said Sayegh, who is also trying to re-build trust after the conviction of his predecessor, Jose “Joey” Torres. 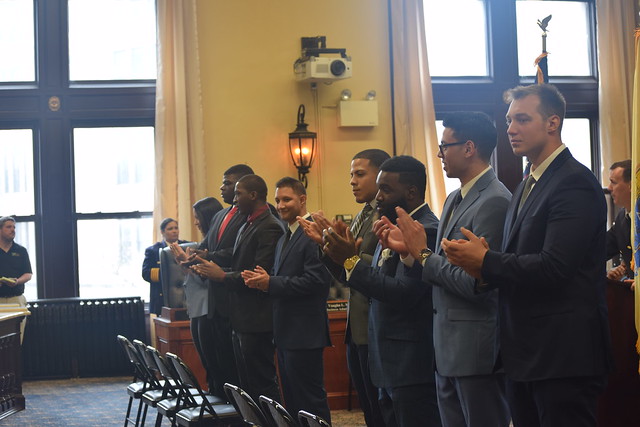