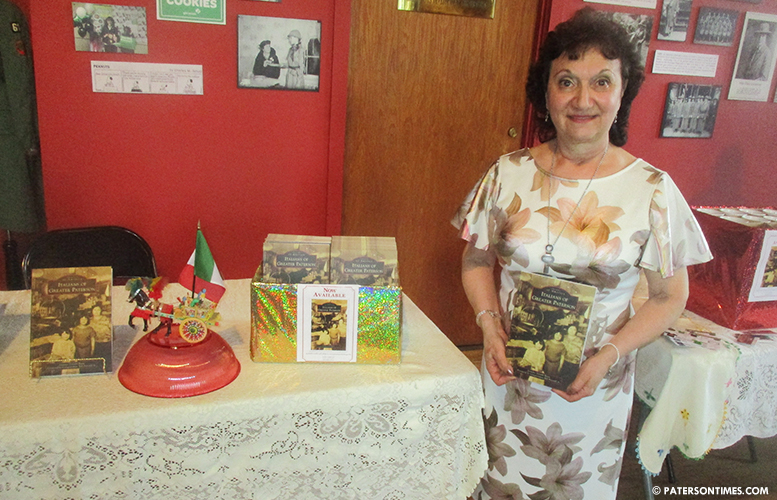 A new book showcases, through vintage images and narratives, the experiences of Italians in Paterson beginning in the early 1900s.

Jennifer Tiritilli Ranu, author of the “Italians of Greater Paterson,” formally launched the book at the Paterson Museum earlier in the month. She recalled the immense effort in putting together the 128-page book.

“I called friends and acquaintances for their original photographs and pictures,” said Ranu (pictured). “I went back and forth with Arcadia Publishing. Some of the photos I received did not meet their standards; they were too old or faded.”

Ranu’s book is part of a long-running series by Arcadia Publishing called “Images of America,” a collection featuring the history of small towns throughout the U.S.

The book is broken up in ten chapters — immigrants and families; Roman Catholic churches; backyard; cooking; fun times; demolition and construction; heroes; club and stores; talents; and athletes — each tackling an aspect of the Italian-American experience in Paterson.

Growing up in Paterson, Ranu’s father worked as a carpenter. The author not only witnessed the ins and outs of the city but also honed a keen interest in local history. She would later lead many student field trips as a teacher at School 27 and John F. Kennedy High School.

Ranu presently serves as a volunteer at the welcome center for the Great Falls.

“My parents were great role models and were proud of their Italian heritage,” said Ranu. “They sacrificed so much to give their children wonderful opportunities.”

Some of Ranu’s childhood memories are in the book. Her sister Nancy Tiritilli is one of the Patersonians featured in the “Italians of Greater Paterson.” Others include her friends Nancy Carlozzi-Garrity and Bernie LaPorta.

The trio shared memories that go back over a half a century.

Nancy Tiritilli grew up with her sister in the same neighborhood – on Jersey Street at the foot of Garrett Mountain — as LaPorta. Both excelled in music. Ranu remembers a young LaPorta playing the guitar as a teenager, in front of Dinah’s Candy Store, with one foot on a milk crate.

Nancy Tiritilli became a composer, lyricist, and playwright. She was a member of the first graduating class of John F. Kennedy High School. She later graduated from Montclair State University with major in classical organ. She taught music at Glen Ridge High School.

She remembers one young boy from the school.

“In 1980, during his senior year, this young man was a wrestler. Unfortunately, he broke his leg.  After that, he sang in the school’s Christmas concert and I talked with him about being in the spring play I would be directing, Guys and Dolls. He said he had never acted before,” said Nancy Tiritilli. “I worked with him every day on his vocals and instructor Bill D’Andrea worked with him on his script. He wound up getting the lead male role in the play.”

She said during presentation of the show “agents form New York came to see him.”

“This young man skipped graduation and went directly into a career in acting,” she said.  “He was an overnight sensation.”

She recently wrote a romantic musical called Winners of the Heart. Her work has been performed at the Rhino Theater in Pompton Lakes and other venues.

Carlozzi-Garrity did not speak a word of English after she arrived in the U.S. from Italy. She lived on Manchester Avenue, attended School 5 and St. Mary’s High School. A black and white photograph in the “Italians of Greater Paterson” shows her working as a part-time cashier at the S.S. Kresge’s on Main Street. She later worked at the iconic Lazzara Baking Company which had two locations on Cross and Dewey streets.

After graduation, Carlozzi-Garrity would become a bookkeeper for Van Vlaanderen Machine Shop on Straight Street.  She then went on to graduate from William Paterson University with a major in Spanish and a minor in Italian. The latter was obtained in conjunction with Montclair State, as Paterson University did not have an Italian language program at the time. She taught both languages at John F. Kennedy and Eastside High Schools for 27 years.  She also went on to earn several advanced degrees.

LaPorta has been a familiar face in the Silk City music scene for decades. A graduate of Central High School in 1960, LaPorta grew up less than a block away from Ranu. Following his senior year, LaPorta was an original member of the pop/rock band, The Happenings.  Their smash hit, See You in September, produced by Bob Crewe on the B.T. Puppy record label, skyrocketed to #3 on the Billboard Top 40 charts. LaPorta also attended William Paterson and was granted a degree in music.

“All of The Happenings — Ralph DiVito, Tom Giuliano, Bob Miranda, and Dave Liebert, were from Paterson,” LaPorta stated.  “We performed throughout the country with groups like Kenney Rogers and the First Edition, The Association, and the Rascals.”

As part of the vocal group The Emerald Experience, LaPorta and his band members had a section of Emerson Avenue renamed after them, Emerald Experience Way.  As teenagers, LaPorta and his musical comrades started out playing in a garage.  Years later, the group still performs locally.  All four original members still participate: LaPorta, Sal Sellitto, George Gerro, and Lenny Contorti.

“Italians of Greater Paterson” is not Ranu’s first book. Her composition, SkateKey, presents 22 childhood stories told by a metal gadget, the skate key. The device was a popular tool used to make a roller-skate fit into a skater’s shoe. Emphasizing diversity, multiculturalism, and religious family backgrounds, the entries in SkateKey take place in eras from the Great Depression to the Civil Rights Movement.

“My mother has inspired me,” said Ranu’s 42-year-old son Jeff Ranu. “She used to take me to all of the historic sites in Passaic County. I saw the Great Falls, all the statues sculpted by Gaetano Federici, and more. My grandfather and family lived in Paterson until our home was torn down due to eminent domain with the construction of I-80. We then moved to West Paterson.”

Ranu is active in visiting schools and sharing her love for literature and writing with youngsters.  She will be a featured guest at the upcoming Career Day at Paterson’s Academy for the Gifted and Talented.

The new book allowed her to re-connect with some of her old friends.

“I really enjoyed contacting old friends and renewing acquaintances,” said Ranu. Her book with a forward by Rep. Bill Pascrell is available on the shelves at Barnes & Noble, Amazon, and the Great Falls visitor center.