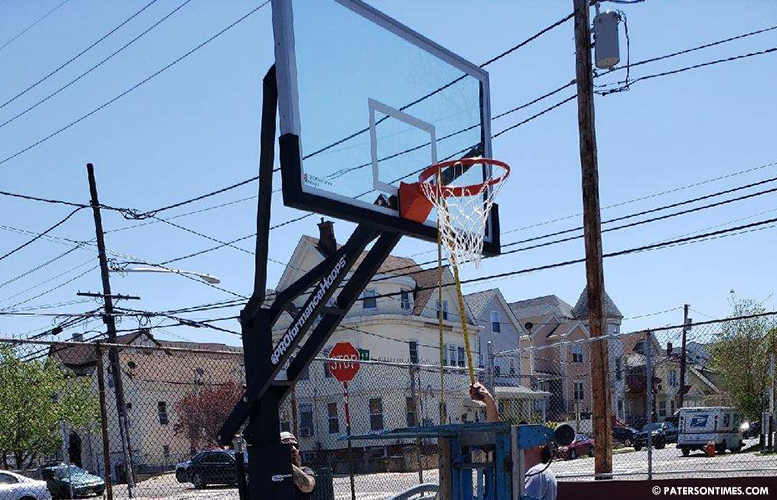 A young Willie Peterkin could play basketball, sometimes until the street lights came on, at the School 13 playground.

Peterkin was disturbed when he returned to his hometown from Delaware in 2009 to find the courts had disappeared.

“Now, the kids really don’t have a place to play,” he said. He joined others and began to raise funds to install new basketball courts at the school.

On Saturday, Peterkin and others, installed a pair of basketball courts. He said it cost approximately $30,000 to purchase and install the new courts at the school. As many as 300 young people came out to play at the new courts, said Peterkin.

On Monday afternoon, Peterkin watched with satisfaction as young people played basketball at his old school.

Peterkin said the work isn’t finished. He plans to add a floor made up of bounce back material to minimize injuries at the court. He hopes the new courts provide an outlet for young people to keep them out of trouble in a city that struggles with drugs, gangs, and gun violence.

Basketball kept Peterkin out of trouble. He graduated from School 13 in 1987 after which attended Eastside High School. He later obtained a bachelor’s degree from Berkeley College, he said.

“She used to play out there with us,” said Peterkin. “I wouldn’t play with her. I didn’t want to get embarrassed.”

Peterkin is raising funds to build more basketball courts at other schools in the city, he said. He needed the school district’s permission to install new equipment at School 13.

When he pitched the basketball courts, school board members speedily accepted the donation.

“I’m looking forward to the next one,” said Peterkin.