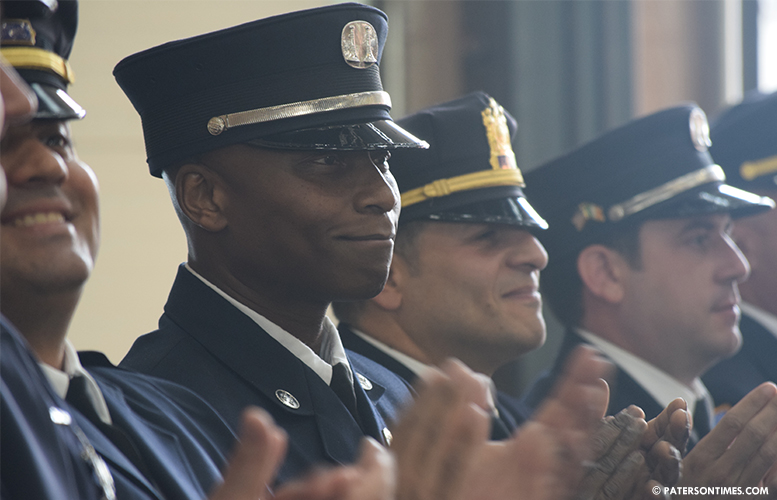 Municipal officials promoted 32 police officers and firefighters in an unified ceremony at the Stony Road section firehouse on Tuesday afternoon.

“You are superheroes to the people that you protect, serve, and save,” said mayor Andre Sayegh making a reference to the “Avengers: Endgame” film to the hundreds of people, mostly family members of firefighters and police officers, in the firehouse. “You are the justice league of Paterson.”

The most popular superhero at the ceremony was Lamar Colclough, first African-American battalion chief in the city’s history.

Fire chief Brian McDermott said Colclough broke the “glass ceiling” that had been in place for 144 years.

Sayegh was asked by a television news reporter what took so long to get an African-American battalion chief.

“I just became mayor 10 months ago,” replied the mayor. He also pointed out this is the first time both police and fire held a joint promotion ceremony.

“It’s a great thing,” said Colclough (pictured) after being sworn-in by Sayegh. He credited his family and his fellow fire employees. “I’m very happy. It’s not about me. It’s about everybody here that worked hard to get where they are at right now.”

Colclough said he is setting an example for his young children, who were at the ceremony, that hard work and dedication pays off.

Colclough was mobbed by dozens of people following the ceremony. Many hugged him and took selfies with him.

Oswald was seated next to eight-year-old police chief Delaney Kurdyla, a cancer survivor, who has captured the hearts of police.

Speziale said there may even be savings.

“These are all replacements. People that went out, went out at top salaries. These people are coming in at bottom salaries,” said Speziale. “There’s no extra.”

Below is a list of the newly promoted police and fire employees: 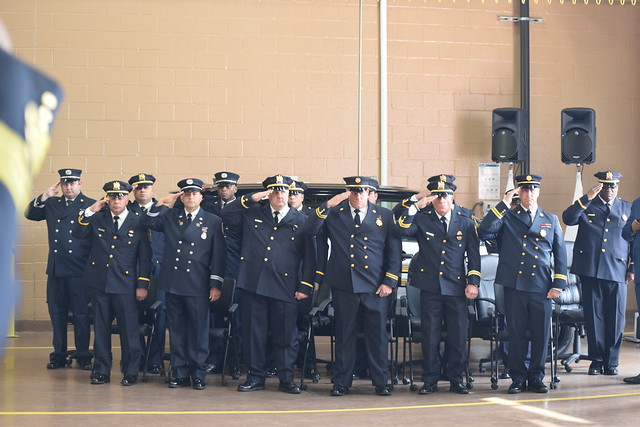