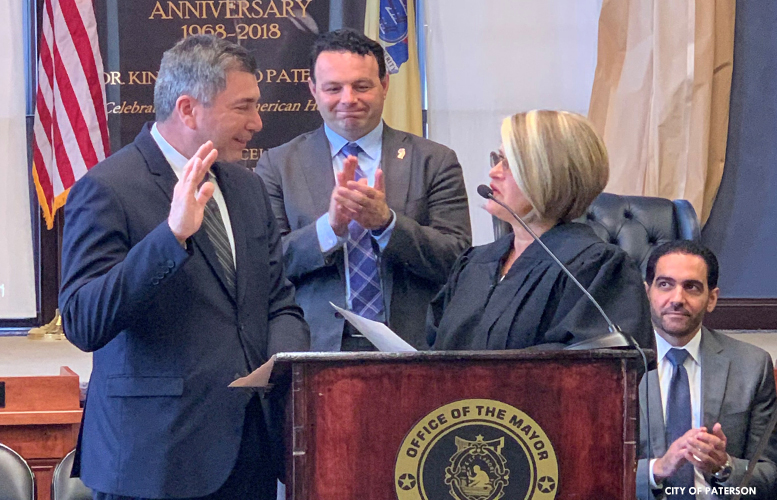 Rodriguez was sworn in by New Jersey Superior Court judge Yolanda Adrianzen. He had been criticized for being too tough on some of the people who appeared before him at the Passaic City Municipal Court over the years during his confirmation process.

“I will be fair and I will treat people with dignity. I aim for residents’ experience with the Paterson Court, and with me, to be a positive one,” said Rodriguez. In his 17 years as a judge, he saw more than 50,000 people come before him, he had said at the confirmation hearing.

A dozen of those people left negative reviews on a website that councilman Michael Jackson cited to criticize the mayor’s judicial appointment. He could not sway his colleagues to oppose the appointment.

Some council members argued the appointment is made by the mayor. Jackson and allies wanted former judge Karen Brown to be appointed to the Paterson Municipal Court. One of Jackson’s argument was that Rodriguez is not a local resident, but that argument was quickly deflated when the judge said he planned to move to Paterson.

Rodriguez also received some criticism for a reprimand that he received from the New Jersey Supreme Court Advisory Committee in 2008. He had been publicly admonished for his display of support for corrupt former Passaic City mayor Samuel Rivera.

Sayegh stood by his appointment despite criticism.

“Judge Rodriguez possesses 17 years’ experience as a jurist and I expect him to be firm but fair,” said the mayor. “I am also proud that he is moving to Paterson.”

Rodriguez was first appointed by Passaic City mayor Rivera and later re-appointed by Alex Blanco. He served as a judge in Passaic City from Jul. 2001 to Feb. 2018, according to his resume. Mayor Hector Lora decided against re-appointing him. He has a bachelor of arts in business administration and English from Rutgers University, New Brunswick and a juris doctorate from Rutgers Law School in Newark.