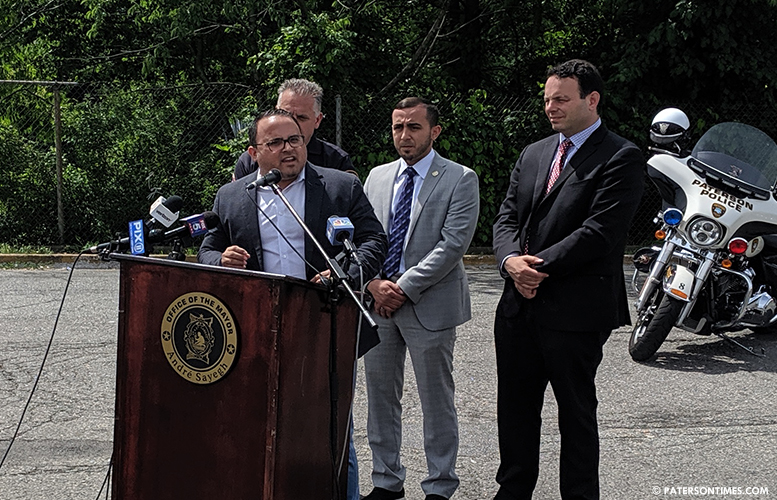 Six police cars, one in every ward of Paterson, will be deployed over the summer months to crackdown on quality-of-life problems such as loud music and group gatherings, announced municipal officials on Friday.

Public safety director Jerry Spezile said each car will be deployed for eight hours from June through September. At first, police will run the cars from 7 p.m. to 3 a.m. on Fridays, Saturdays, and Sundays, he said. As time passes, the director said, police will fine tune the deployment hours.

“This is going to be a game changer for us,” said Speziale. He said each car will be locked in or jailed in each of the wards to handle quality of life issues that arise in that area. “This may be the silver bullet.”

Abdelaziz said the location had 70 vehicles and 150 people drinking, smoking, and partying late at night.

“You have to see what’s going on in the streets of Paterson around midnight,” Abdelaziz recalled telling Rivera.

Abdelaziz pulled Rivera out of his house. Both men drove to the site and observed the situation.

“Al and I said to ourselves this is not going to continue,” said Rivera. He said for far too long municipal officials have made excuses leaving the same problems unresolved for years. “We did not get elected to continue to provide excuses to taxpayers for things that aren’t done.”

Rivera and Abdelaziz said the mayor took their concerns seriously and the plan was put together. Sayegh on Friday said he had broached the summer quality of life problems issue at a cabinet meeting around the same time.

“Loud music has been a persistent problem in Paterson since as far as I can remember,” said Sayegh. “This will no longer be accepted.”

Some residents welcomed the new initiative.

“It’s a great idea that they are doing this. We cannot sleep,” said Gladys Sivori, a resident of nearby Delaware Avenue.

Municipal officials said the officers will be paid overtime. Rivera wants police to assign newer officers to the quality-of-life cars to keep the costs down.

“We feel as if this will pay for itself,” said Sayegh. Summonses issued during the three days will generate revenue for the city. “With younger officers, overtime costs will be kept to a minimum.”

Sayegh couldn’t provide an approximate cost for the initiative at the press conference. His administration later provided information that it will cost approximately $76,500. The six cars will put in 56 hours a day for three days, which is 170 hours per a weekend for approximately 10 weeks, for a total of 1,700 hours. Each hour is $45.

At the press conference on 23rd and Alabama Avenues, a resident complained about property tax increases. Sayegh told her it was “unrelated to the topic at hand.”

Both Abdelaziz and Rivera hope the new initiative will tackle the perennial summer problem of loud music.

“Those days are now over,” said Abdelaziz.