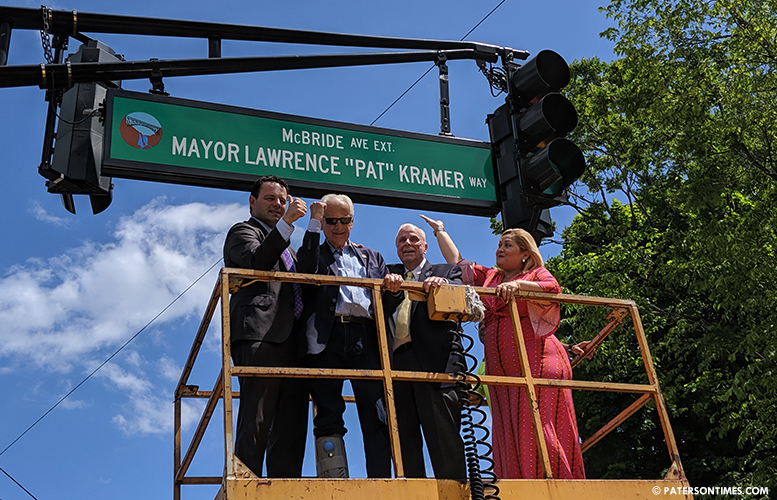 President Gerald Ford visited the city in 1976 to designate the district. Kramer told a humorous anecdote from that day to the few dozen people that gathered at Overlook Park.

“The president of the United States came that day in the rain. Of course, presidents have to always look presidential. So, we had a change of clothes at our house,” said Kramer. “When we left here and went to East 38th Street. As fate would have it, the president, of course, wanted to go right upstairs to the bedroom, take of the wet clothes, and start over with new ones.”

“Petunia growled as he arrived,” said Kramer. “I said, ‘Petunia, for God’s sake, you’ve never bit anybody in your life, please don’t start with the president of the United States.’”

Kramer received loud laughs and applause for the anecdote.

“How does an old gray mayor say thank you?” remarked Kramer.

Kramer served four terms as mayor. In 1967, Kramer became the city’s youngest-ever elected mayor. Kramer served as mayor from 1967-71 and 1974-82, according to the street naming resolution additionally naming the McBride Avenue Extension between Spruce and Mill Streets after him.

Council president Maritza Davila, who sponsored the street naming resolution, told Kramer the city wanted to hand him flowers while he could still receive them.

Besides his work in securing national recognition for the Great Falls Historic District, Kramer is most proud of the building boom that happened under his watch. He previously mentioned the public safety complex, the municipal court buildings on Broadway; the Health Department building, the high-rise office building, former home of the Broadway Bank & Trust Company, on Hamilton Plaza; two new parking garages in downtown Paterson; the Madison Avenue firehouse; the Hillcrest fire station; School 9; and the South Paterson Library building.

“Pat Kramer is one of the greatest mayors of all time,” said mayor Andre Sayegh, who has been occupying the “old gray mayor’s” seat for 11 months.

Public works employees elevated Kramer and others up to the large street sign at the intersection of McBride Avenue Extension and Spruce Street using a truck.