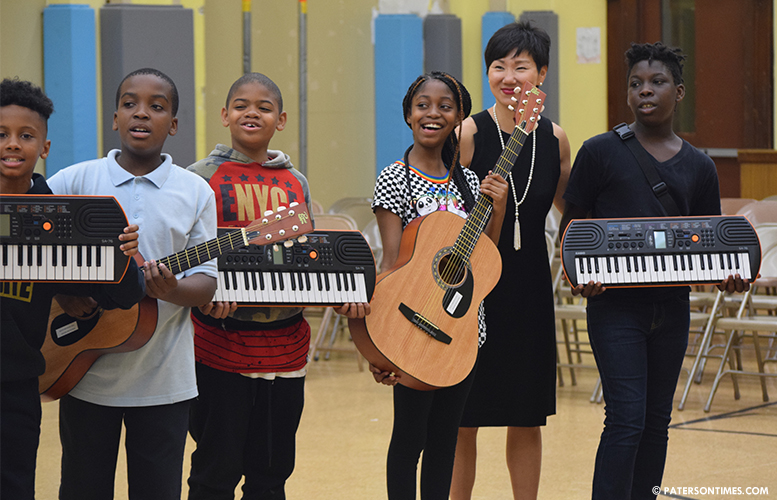 Music teacher Jaimeo Brown had just one piano keyboard for his hundreds of students at School 21. On Thursday, School 21 received 15 piano keyboards and 15 guitars from the Saddle River Arts Council.

“This makes a huge difference here at PS 21,” said Brown, who started teaching music at the school in September. When asked if he planned to use them in the next school year, Brown replied, “I’m planning to use them this year. We got two weeks left. We’re going to get in there right away.”

Students were eager to try out the new instruments. Some took them out of the packages and began to play and pose for pictures.

“I can show off all my skills,” said 12-year-old Brian Ferguson, a 5th grader. He plays the keyboard, he said. “It makes me feel calm.”

“My favorite instrument, honestly, is the guitar. I have a song that I can sing with the guitar. It’s like a made-up song. I love the song. It goes like this, ‘I want you to know my name,’” said 10-year-old Kimora Odom-Holly, a 4th grader.

Odom-Holly said she hopes to use the donated guitars to sing the song at the school. She and a dozen other School 21 students put on a West African drum and dance performance at the gymnasium for their benefactors.

“Our number one goal was to give back and to provide cultural and arts to communities that don’t have access to it,” said Maria Harper, president of the Saddle River Arts Council, a nonprofit that was formed earlier in the year. “We started with kids because it’s really important that children have that exposure early on.”

Harper said the group contacted the Paterson Public Schools to give the instruments. School officials selected School 21. The instrument donation comes at a time the school district has eliminated music and art programs put in place in September.

Superintendent Eileen Shafer hired teachers to restore art and music at the schools in September. A budget shortfall eliminated 12 music and 7 art teachers. These were among 128 employees cut last month.

Brown, the music teacher at School 21, was spared.

“We’re not cutting a music teacher. Mr. Brown is with us full time. It was a hard decision,” said JoAnne Riviello, principal of School 21. She did have to cut six employees, according to district records.

Students receive music instruction for half of the school year and art the other half, said school officials.

Riviello said School 21 students come from challenging backgrounds. The school has more than 800 students. 88-percent of them come from economically disadvantaged background, according to state data. She said art and music keeps them motivated and interested in coming to school.

“We didn’t have a music teacher my first two years,” she said. She had been picked to implement a “turnaround” plan at the school, which runs from pre-k through eighth grades, three years ago. 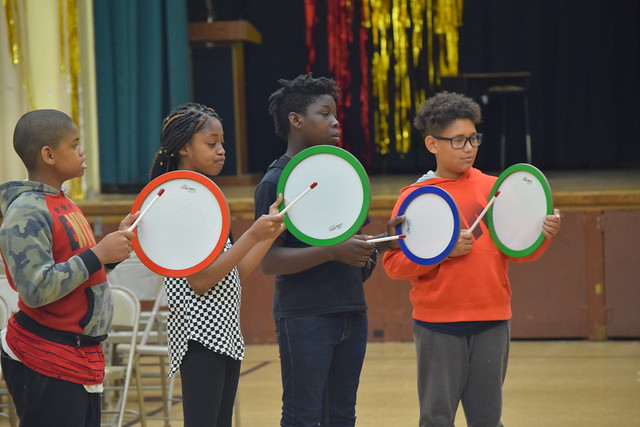