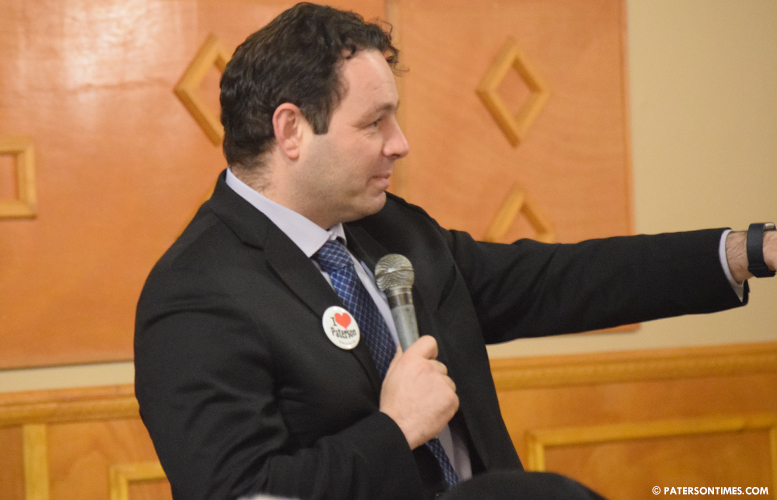 Mayor Andre Sayegh was roundly criticized by the leadership of the City Council on Tuesday night for his attempt to force a second vote on the controversial Hinchliffe Stadium rehabilitation proposal by invoking an obscure “emergency” provision in the law.

Sayegh wanted council members to reconsider the Hinchliffe Stadium lease agreement which was voted down last week. On Tuesday, he tried to explain the unprecedented “emergency” move by stating he attempted to get the item on the special meeting agenda through normal channels.

“I followed proper protocol to have the item placed on the special meeting agenda,” said Sayegh in defending his action.

“No, you did not follow proper protocol,” interjected council president Maritza Davila.

Last Thursday, Sayegh tried to reach Davila by phone and email without success, he said. He then called and spoke to council vice president Michael Jackson.

Jackson rejected Sayegh’s request to add the item to the special meeting agenda, said the mayor. Sayegh then contacted law director Khalifah Shabazz. Municipal attorney Ben-David Seligman told Sayegh that there’s an “emergency” provision that allows the mayor to place an item on the agenda, according to the mayor.

The item was placed on the agenda; however, late Friday, city clerk Sonia Gordon, told the administration the item was added due to an error. She cancelled the vote on the item.

Sayegh said the council’s rejection of the lease agreement constituted an emergency because there’s a looming deadline to submit the proposal to the state by Jul. 1, 2019 for $40 million in tax credits. “If we squander any of these tax credits then we’re essentially giving millions of dollars back to the state of New Jersey,” he told the council.

Davila denied getting calls from the mayor. She said she received a late email.

“The irresponsibility of the mayor in bringing this to us in a timely fashion does not constitute an emergency on our side,” said Davila.

Jackson called the mayor’s move “underhanded.” He also claimed Seligman raised his voice to the deputy city clerk during the failed “emergency” effort and called on the law director to reprimand him. “What he did was beyond disrespectful,” said Jackson.

Davila said if it were a true emergency, the mayor would have immediately reached out to her to schedule a second vote on the measure on Wednesday or Thursday of last week. “He did not do that. No one in his administration did that,” said the council president. “What does that say to you? It’s a disrespect not just to the council president, but the entire governing body.”

Davila called the Sayegh administration “irresponsible.” For two months council members had been calling on Sayegh to provide information on the projects expected to receive a portion of the $130 million in tax credits, she said.

“To try to pull the wool over our eyes, the way you did, not only was it unfair, it was ugly and disgusting,” said Jackson. He also raised questions about other tax credit projects that the mayor has yet to present to the council.

“Some of the other projects that you are failing to disclose to the council possibly have personal ties to you and your campaign,” alleged Jackson. “Why weren’t they opened up to an RFP process?”

Business administrator Vaughn McKoy had stated the city was not required to conduct a request for proposal (RFP) process. He said the administration also did not have time to conduct one.

Council members wanted Sayegh’s administration to provide them the redevelopment agreement with Baye Adofo-Wilson and co-developer RPM Development Group for the Hinchliffe Stadium. Davila said the governing body was provided the information after the council rejected the lease agreement.

“What is in the redevelopment agreement is a travesty,” said Davila.

Davila said the agreement calls for the developer to contribute a paltry $50,000 to the project. It also states the developer will seek a long-term tax abatement, she said.

Sayegh tried to strike back after the chastisement.

“I’m being the adult in the room. I’m not making any accusations,” said Sayegh. “If we don’t get Hinchliffe back on the agenda, we squander thirty-plus million dollars in tax credits.”

“It’s very shameful how this is unfolding. These items are much too important for them to be handled in this fashion,” said Jackson referring to the administration’s failure to present the entire portfolio of tax credit projects due to the state in less than two weeks. “I’m hoping the mayor understands the seriousness and grows up a bit.”

As he left the council chambers, Sayegh did not take questions from reporters on the project. He was led by his chief of staff Kathleen Long to her second-floor office. Both appeared to hide in the office waiting for clearance.

Some activists launched personal attacks against the mayor questioning his intelligence after he left the chambers.

Sayegh’s administration officials presented their renovation plan for Hinchliffe Stadium in early May. It includes 80 apartments, a restaurant, 300-space parking deck, and gallery space for Negro league history for $70 million.

Jackson said the mayor is engaging in “foul play” by trying to drum up community support for a questionable project.