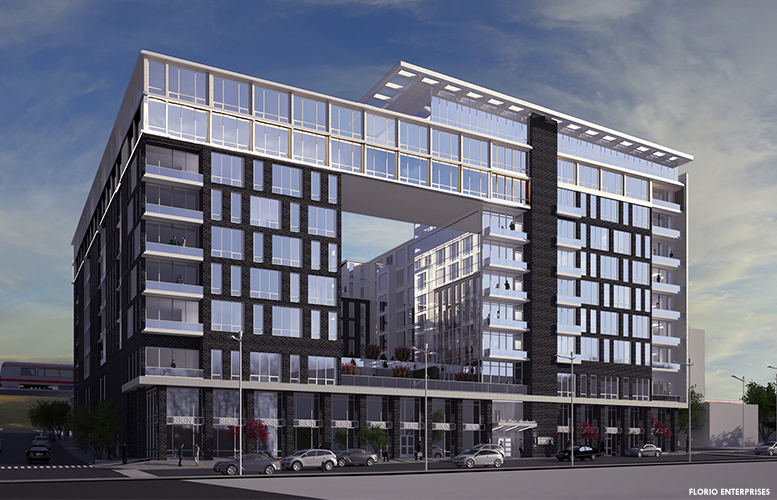 A 10-story mixed-use luxury housing complex that will have 206 apartments has been approved for Hamilton Avenue. Prominent developer Charles Florio secured municipal approval for the $50 million construction project on Monday night.

“It will be the highest end, most luxurious property not just in Paterson, but in Passaic County,” said Florio on Wednesday.

Florio said he is not sparing any expenses to build the highest standard luxury housing complex in Passaic County. “I had a sun study done to see what hours of the day the sun will actually hit the pool to make sure we place the pool in the right location,” he said. “I want to get it right.”

Construction on the project will begin in the next 90 days, said Florio. “Goal is to break ground at the end of August,” he said. He hopes to have the building finished in 24 months.

Last year, Florio had to get the city to changing zoning for the area to allow a 10-story building at the location. Previously, the building height restriction in the area was 7-story.

Donald Lynch, who lives in the neighborhood, said he worries about increasing vehicle traffic to the area. He also expressed concern about the types of tenants Florio might house at the complex.

“Is this Section 8? We are worried about it being turned into Section 8,” said Lynch referring to low-income residents, who receive government subsidized housing.

Florio said the apartments will be market rate.

Lynch said he was unaware the Paterson Planning Board had scheduled the matter for Monday night. He wished he had known. He wanted to see the traffic study for the area.

The complex to be built on a lot at 94-110 Hamilton Avenue could uplift a badly depressed part of Paterson.

“It’s a possibility. It might change things,” said Lynch. He said there have been drug overdoses at the lot where Florio is building.

Correction: A previous version of this report erroneously stated the Board of Adjustment approved the project. It was in fact, the Planning Board.