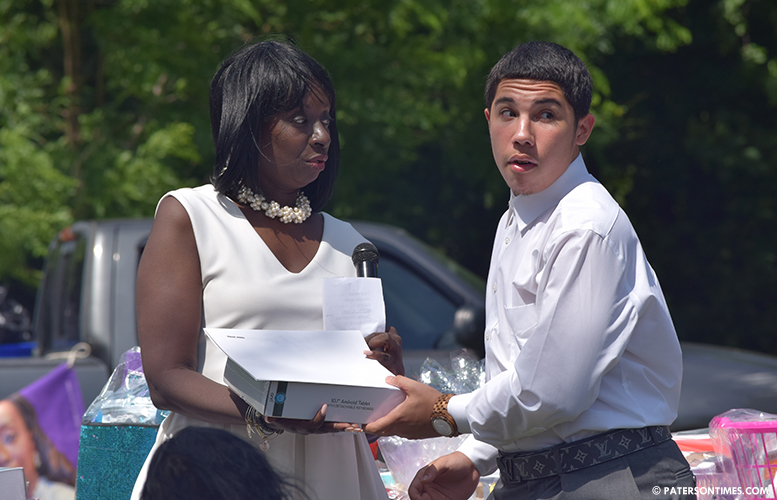 Mimms gave a third-year Virginia State University student a $250 scholarship. Her scholarships for students heading to college in the fall took the form of two-in-one tablets. She said the total scholarships were worth $5,000.

“Every year, for 15 years, I’ve been doing scholarships for students throughout the city of Paterson because I believe our students are important,” said Mimms, a former school board member, while giving out the scholarships at Mary Ellen Kramer Park.

Mimms pointed out the students receiving scholarships are all Paterson residents. She also said the students come from the city’s many ethnic communities.

One student to receive a tablet computer was Michael Boria, 18, of the Silk City Academy.

“I don’t have a laptop so this will be perfect,” said Boria (pictured). He said he plans to use the Android tablet with keyboard for school work. “I’m just grateful.”

Getting the scholarship also boosted Boria’s confidence. He had been transferred from International High School to the Silk City Academy for low academic performance. He has changed that, he said.

Mimms said she did not want to write off students, who did not have extremely high-grade point averages. She picked two or three students with unexceptional grades.

Boria is graduating with his International High School peers on Wednesday. He is heading to the Passaic County Community College for the summer. He will then move to Stockton University, he said.

Boria wants to be a physical therapist.

Mimms also gave the students gift baskets that included blankets and comforters, essentials for students who plan to dorm.

Over the years, Mimms has witnessed the difference her scholarships has had on students and their families.

“It’s been very helpful. I use that computer to this day,” said Tamia Williams, a senior at Syracuse University. She was a Mimms scholarship recipient in 2016. She received a laptop and a printer.

“When I was a child, I didn’t see it being done for me,” said Mimms. She did not go away to college, but her daughter did.

Mimms tries to equip her scholarship recipients with laptops and other essentials just as she did for her daughter.

“I think we have to pay it forward for our young people,” said Mimms. She said she funds the scholarships through donations and from her own pocket.