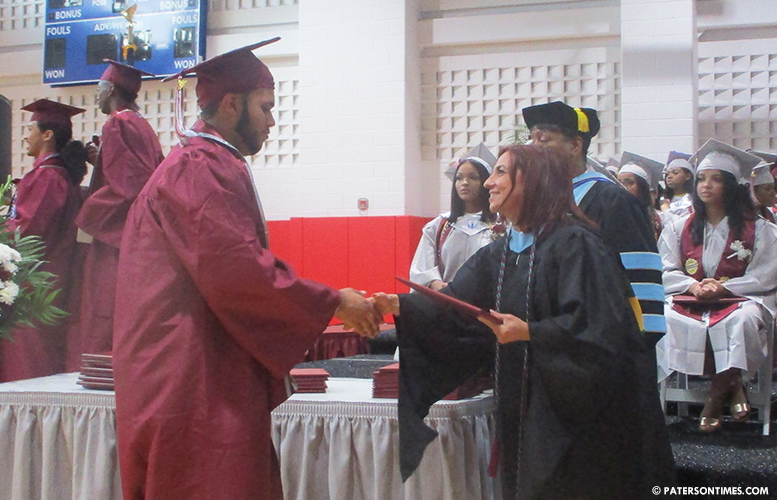 A group of forty students became the first graduating class of the International Baccalaureate program at International High School on Wednesday evening.

Students received a world-class education — taking high-level courses like physics, theory of knowledge, a course that requires students to turn in a 1,600-word essay, and Mandarin, one of two main Chinese languages — through the Swiss developed academic program.

“They were challenging and kept me on my toes. I had to always push myself to keep my grades up,” said salutatorian Sahara Sampson. She is heading to Howard University in the fall, she said.

Her final grade point average is 4.83.

Sampson explained that GPA at International High School can exceed 4.0 through excelling in honors classes. She said some of the courses she took throughout her academic journey included economics, honors chemistry, and AP U.S. History.

“The IB program is more difficult than other schools,” said Tanim Ahmed. “However, some of the most difficult classes were the ones I enjoyed the most, such as physics.”

School officials proposed the International Baccalaureate program in 2015 to create a school that would challenge students. After getting approval from the International Baccalaureate foundation, the program was implemented in 2017. The program’s aim is also to keep high-achieving high school students in the district. Many of the district’s top students, particularly those from the high-performing Gifted and Talented Academy, were being taken by the likes of the Passaic County Technical Institute (PCTI).

Ahmed is deciding whether to attend the New York Institute of Technology which gave him a $17,000 scholarship or William Paterson which is closer to home. He plans to major in computer science to become a programmer.

“You may feel torn today between the past and the present but think about where you are,” said deputy superintendent Susana Peron. “This is the first graduation IB class for International.  Only 15 other schools in New Jersey have this program and we are the only one in Passaic County.  This is a credit to you students and to the city of Paterson.”

“The scholarships are based on student achievement and excellence,” Peron told the students.  “Today, you have taken a major step forward. Continue to keep moving forward.”

The IB program students, set apart by their blue and white cords, were among 116 seniors to graduate from International High School. This year marks the school’s 10th anniversary.