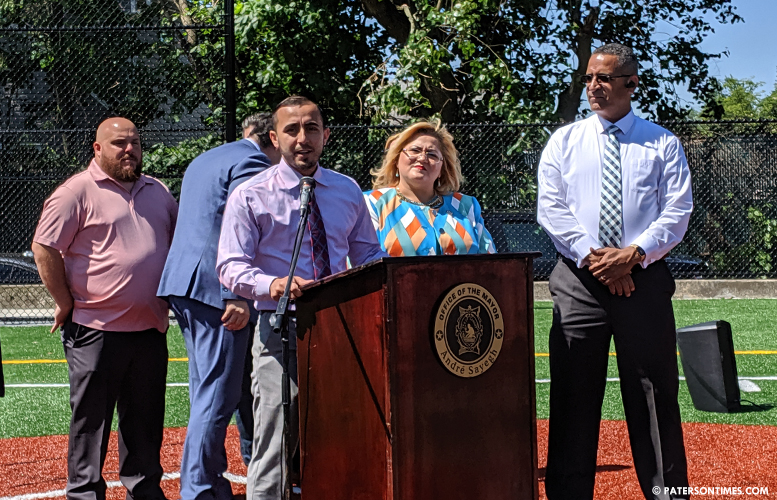 Football, softball, baseball, and soccer will be accommodated at the renovated field. Municipal officials spent $1.37 million to fix the field that had been neglected for years.

“I was sick and tired of hearing we can’t host our games here,” said councilman Al Abdelaziz, who marshalled his colleagues to force mayor Andre Sayegh’s administration to set aside funds in a massive borrowing measure for public safety retirement payouts to renovate the field. He said often local teams could not host games in the city due to lack of facilities. “All our families, now, do not have to leave Paterson to go watch their kids play.”

Softball and baseball games were scheduled to be played at the new field on Monday evening.

Abdelaziz argued the public needed to see something tangible from the borrowing measure. His colleagues on the City Council — particularly Michael Jackson and Flavio Rivera — backed him up.

“We don’t need power washing of City Hall as much as we need a field,” said Jackson. He represents the area where the park is located. Sayegh’s administration wanted to use a portion of the funds to wash the historic City Hall building that was re-allocated to the field project by the council. “We need fields all over the community. I’m an avid believer that things like this will get in the way of some of the crime and violence.”

“An idle mind is the devil’s workshop. If we keep our kids busy, they don’t have to worry about getting in trouble with other things,” said assemblyman Benjie Wimberly, recreation coordinator for the city and the school district.

John F. Kennedy High School will use the field for practice and games, said officials. At the ground breaking in March, officials said the unsightly trailers will serve as locker room space for student athletes.

“This is the outcome of a collaboration,” said Sayegh speaking of his administration and the council.

Municipal officials had said the field will also accommodate cricket, a sport popular with those who hail from the former British Empire colonies, particularly the Jamaicans and the Bengalis in Paterson.

“There are some plans for cricket in the future,” said Phil Pirro, vice president of Athletic Fields of America of Montville, which handled the project. “They just have to order some equipment to do that.”

The field has various drawn linings for other sports. Pirro pointed out cricket doesn’t require any lines on the field.

Pirro pointed out the project was completed on time and within budget. His firm started two weeks late and had to wrestle with the rain. He had promised to have the field done by the Fourth of July, but managed to complete it ahead of schedule.

Pirro said the renovated field has an eight-year warranty. Properly maintained, the 125,000 square feet field could last 10-12 years, he said.

Public works director William “Billy” Rodriguez said the city is looking at hiring the firm to handle maintenance. A key piece of maintenance is making sure the synthetic turf fibres remain in good shape.

Pirro said he looks forward to receiving more work from the city. His firm impressed public works officials for quality of work and the fast turnaround time.

Rodriguez said maintenance will be done four times a year.

Public works employees will receive some training to maintain the field. However, the city does not have adequate machinery to handle maintenance on its own. 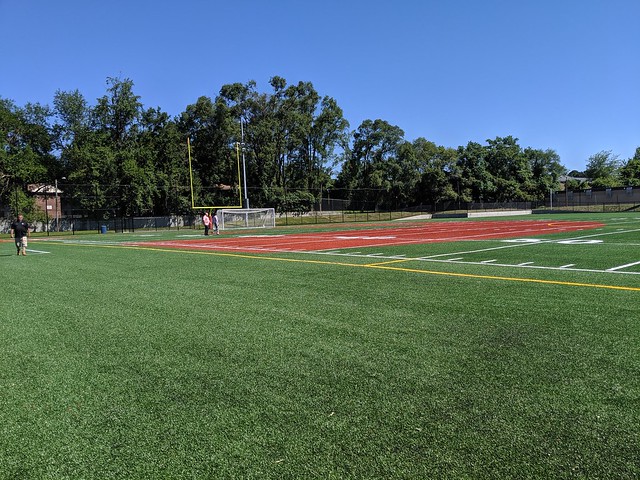