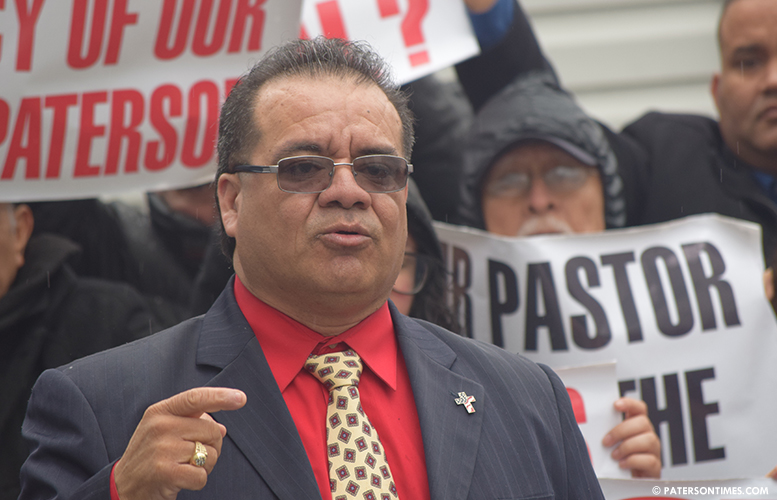 After opposition from his neighbors, controversial pastor Jesus Sevilla says he will demolish a small building, once used as a church and food pantry, in his rear yard that was constructed without municipal permits.

“I will do the demolition of my place,” said Sevilla last Friday. A day earlier, his attorney, Alan Mariconda, withdrew an application he had submitted to the Board of Adjustment to legitimize the garage at 157 Atlantic Street.

Sevilla said he will do the demolition to “stop the games” and the “stop the nightmare.”

Sevilla’s neighbors, more than a dozen of them, appeared at the meeting prepared to object to his application to turn the building into a home office. Some came armed with evidence boards to make their case.

Previously, Sevilla sought the same board’s approval to run a church out of the residential street. He withdrew that application after protest from neighbors and relocated the church.

“He wants us to get tired of it,” said one neighbor, who would not provide his name. He and his neighbors vowed to continue their opposition to Sevilla’s move to legitimize the building. “We’re going to keep fighting to the end.”

When asked when he will demolish the structure, Sevilla could not provide an approximate date. He said he does not have the funds for demolition.

Demolition will cost $5,000 to $6,000, estimated Sevilla. He spent $33,000 to build the structure. He claims a portion of the structure always existed in the yard, but neighbors, who had aerial satellite images, disputed his claims.

“I’ll believe it when I see it,” said Karen Agosto, who led neighbors in opposition to the pastor, when told Sevilla intends to demolish the structure. She did not find his words credible, she said.

Agosto said it is likely that Sevilla felt he could not get approval from the board due to the heavy opposition. Indeed, the Board of Adjustment has raised many more questions about the building. For example, the board’s questioning led to new revelations that a small part of Sevilla’s building was built on his neighbor’s property line.

There were also questions about rooms in Sevilla’s home that may have been allegedly built without permits.

When told Sevilla said he lacks the funds to demolish the property anytime soon, Agosto said, “Doesn’t he have enough from the church fund?”

The neighbors have long complained to the municipal government. Sevilla was issued violations, but enforcement was not strong enough to force him to permanently rectify the problem.

In 2016, the Community Improvement Division issued a demolition order to Sevilla to remove the structure within weeks. On the day Sevilla had to demolish or correct the issue, construction official Gennaro “Jerry” Lobozzo wrote over the notice “rescinded” and signed his name.

It’s not clear why Lobozzo rescinded the demolition order. He did not enter the revised notice into the system until Apr. 1, 2019, when economic development Michael Powell inquired about the Atlantic Street issue.

“He and everybody else need to follow the rules,” said David Gilmore, director of Community Improvement Division, referring to Sevilla without mentioning his name. “We can give summonses, but that doesn’t fix the problem.”

Gilmore said Sevilla just needs to take out a demolition permit to remove the structure.