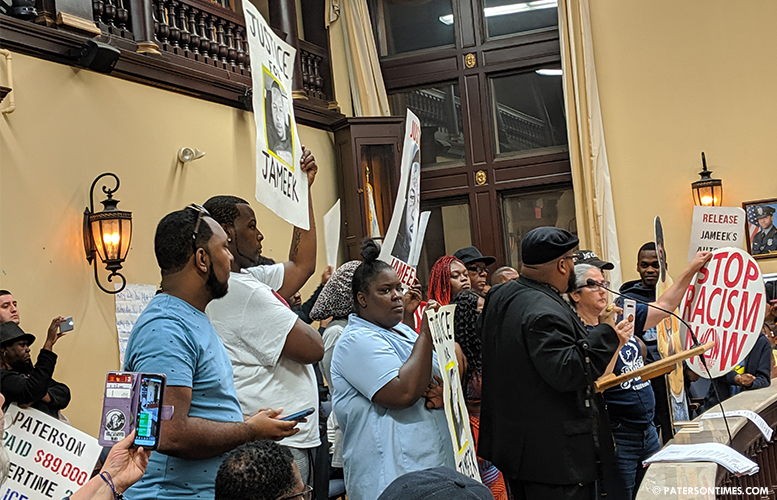 Protesters began chanting and hurling profanity at City Council members at the meeting after council president Martiza Davila would not allow them to speak. None of the protesters signed up to speak at the meeting.

“We do not have any answers,” said the council president trying to calm the crowd. She told the protesters the City Council has sent a letter to the New Jersey Attorney General and the Passaic County Prosecutor urging both to provide an update to the family and the community. Letter was sent to both agencies on May 8th via email and regular mail. “I don’t know what else to tell you.”

Davila allowed one of the activists, Corey Teague, to speak for the entire group. Her move momentarily calmed the protesters.

“Everybody’s pissed off because there’s been no answers,” said Teague. “We don’t want it swept under the rug.”

Teague and the other activists began their protest on the steps of the historic City Hall before heading to the third floor to confront the council.

“Where is the autopsy? That’s what we want to know,” said Zellie Thomas, leader of the Black Lives Matter in Paterson, in front of the City Hall.

Passaic County prosecutor Camelia Valdes had been waiting for the autopsy report from the New Jersey Regional Medical Examiner’s Office in early April. She did not respond to a message seeking her comments for this story.

Some council members also wondered why it’s taking so long to get answers.

“We want answers too. We want this resolved,” said councilman Luis Velez.