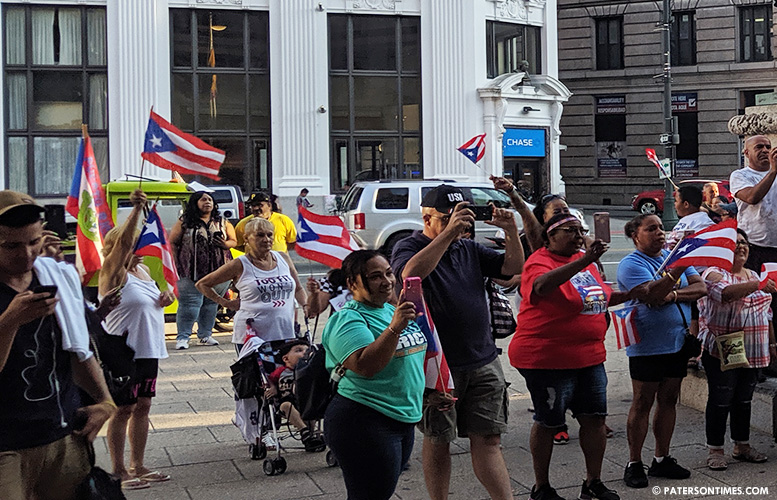 Dozens people rallied in front of the historic City Hall in Paterson in solidarity with Puerto Ricans protesting their governor last Wednesday evening. Many of them rejoiced at governor Ricardo Rosselló resignation announcement later in the night.

“I was happy, the people have spoken,” said Juan “Mitch” Santiago, a well-known Puerto Rican leader in the city, after the announcement. Rosselló, who had faced huge protests after leak of offensive chat messages, will step down on Aug. 2.

Among the messages was one where an aide joked about the bodies piling up following hurricane Maria in 2017.

Santiago said that struck him hard. “It got me so upset,” he said. His father, Amador Santiago, lived in Naguabo when Maria struck.

Santiago said his father was seen as a hero by many in his village after the storm.

“Your father got on a horse and traveled all over where the government was giving out supplies,” Santiago recalled villagers telling him at his father’s funeral. His father had two horses that he used to obtain supplies for villagers in the aftermath of the storm which destroyed roads and power lines, making some parts of the island difficult to reach. “That made me feel good about my dad.”

Villagers paid their respects to the father at his funeral, said Santiago.

Santiago attended Wednesday’s rally to show his solidarity with the protesters in Puerto Rico against what he called a “corrupt” government.

Villanueva said she wanted everyone to know the city’s Puerto Rican community stood with their brothers and sisters back home. 24,000 Puerto Ricans call Paterson home, according to U.S. Census data provided by Villanueva. She said that number is more like 30,000 after the storm, when many families moved to Paterson.

Some of the speakers at the rally chanted for Rosselló removal. Council president Maritza Davila, who is partly Puerto Rican, led the rally.

“This is about Boricuas today,” said Davila, who addressed the 75 people, mostly in Spanish, from the steps of the City Hall.

“We stand in solidarity as Americans with our Puerto Rican brothers and sisters, who have been betrayed,” said mayor Andre Sayegh, who addressed the crowd in both English and Spanish.

A crew of people, including councilman Luis Velez, who is Puerto Rican, took relief supplies to Puerto Rico in the aftermath of the storm.

Paterson was one of many cities throughout the world to show solidarity with protesters in Puerto Rico.