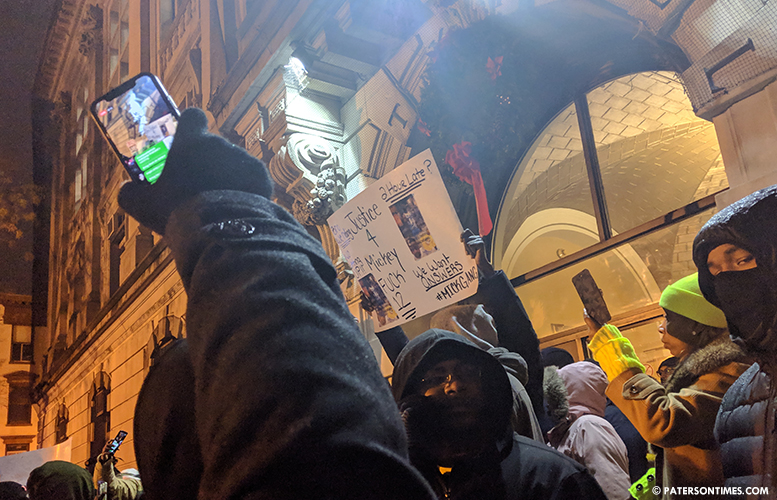 27-year-old Jameek Lowery, whose death sparked multiple nights of protests in the streets of Paterson, died from an adverse reaction triggered by the ingestion of bath salts, according to information released by Passaic County prosecutor Camelia M. Valdes on Monday afternoon.

“The Medical Examiner determined that the ingestion of the bath salts by Mr. Lowery coupled with pre-existing medical conditions triggered an adverse physical reaction including multiple organ failure and cardiac arrest that ultimately led to his death,” said Valdes in a statement. “This reaction was occurring during the police and medical personnel’s interaction with Mr. Lowery and was independent of and unrelated to any force utilized. The timing of Mr. Lowery’s death is an indication of the conclusion of this reaction and not a result of any action by the police or fire department personnel.”

Valdes cited an Apr. 16, 2019 Medical Examiner report that stated Lowery died due to “Cardiac Arrest during Active Psychosis while Under the influence of Acute N-Ethyl Pentylone (Bath Salts).”

Manner of death was ruled accidental. “Accident” is one way the Medical Examiner may classify the manner of death, explained the information released by the prosecutor. Others include “natural,” “homicide,” “suicide,” and “undetermined.” In a situation involving voluntary ingestion of illegal drugs, the determination of “accident” means “there is little or no evidence that [the ingestion] occurred with intent to harm or cause death.”

“It’s bullshit. We know he was murdered,” said King.

King and others had been protesting at City Hall and elsewhere asserting Lowery had been killed by police officers.

The latest information released by the prosecutor provides additional details of how Lowery died.

Lowery called 911 at 2:45 a.m. on Jan. 5 from his home and told a dispatcher he had taken too many ecstasy pills and needed an ambulance to take him to the hospital. He arrived at the hospital, but had to be escorted out by security personnel at 3:25 a.m. after becoming “erratic.” He then entered a private cab with an acquaintance to be taken home. When the cab driver halted at a red light on Straight and Market Street, Lowery exited the vehicle through the window and ran towards the police headquarters.

Lowery called 911 again, this time from Wendy’s on Broadway, telling the operator some people were trying to kill him. He then walked a short distance to the Frank X. Graves Public Safety Complex seeking assistance from police. He appeared barefoot in the lobby of the police headquarters continuing to report someone was trying to kill him.

Lowery live streamed a video presaging his own death. He called 911 a third time from the police station. Police requested an ambulance to take Lowery to the hospital. He walked into the ambulance, but became “resistant.” He “became physically combative by striking, kicking, and/or spitting” on police officers, according to Valdes’ investigation findings.

Police used a compliance hold to secure him into the gurney, but the straps on it initially failed to restrain him. He continued to be “physically combative” towards the officers. Police officers struck Lowery “several times with their fists to gain control and secure his wrists.”

There were no facial or bodily fractures, according to the findings.

The officers were able to handcuff Lowery to the gurney, strap him in place, and restrained him for transport. He was taken to St. Joseph’s Regional Medical Center within minutes without the ambulance making intermediate stops.

After receiving the findings from the medical examiner’s office on Apr. 16, the prosecutor’s office continued to investigate – reviewing several months of physical evidence, documentary materials, and witness information.