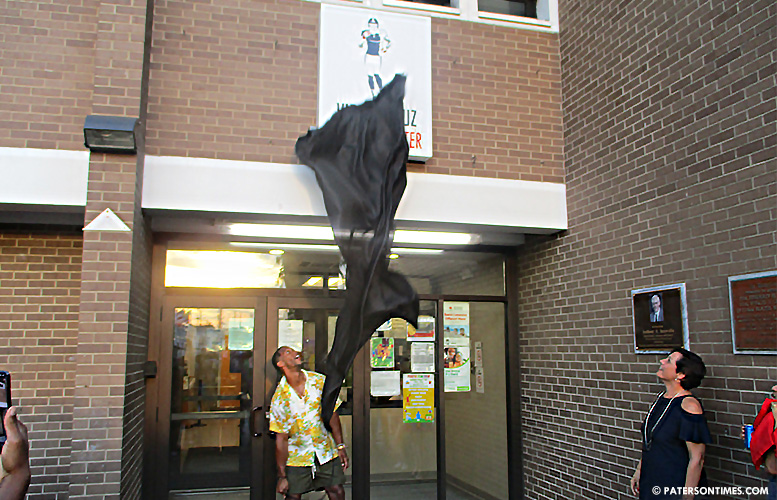 In front of dozens of supporters, Super Bowl and hometown hero Victor Cruz reached high and pulled on a canopy outside the Boys & Girls Club in Paterson. Unveiled was a beautiful new sign: “VICTOR CRUZ AQUATIC CENTER” — complete with white background, blue and red lettering, trademark colors of the uniforms of Cruz’s former team, the New York Giants.

The All-Pro NFL wide receiver was honored for his virtual life time of service to the Boys & Girls Club. In particular his efforts to secure half-million dollars to renovate the state-of-the-art pool, according to Wendy McGuire, chief executive officer for the Boys & Girls Club of Paterson and Passaic.

“Growing up here and being part of the Boys & Girls Club, I wanted to give back to young people so they could have things that I did not,” said Cruz. “I wanted to do what I could to help the young people of Paterson.”

Renovations cost $800,000, said McGuire. Improvements included new walls, bleachers, office space, HVAC tile, new paint and graphics, and updates to pool mechanics. The Snowflake Foundation partnered with MetLife, Robert Wood Johnson, Chase, and the Victor Cruz Foundation to provide the funds for the repairs which began in 2013. Cruz was instrumental in connecting the Boys and Girls Club with the two organizations.

“Victor has not only come here a few times, he has returned often,” McGuire said. “His efforts have helped fix needed repairs for the pool to improve safety and enable children to swim. Victor attended this very club while growing up in Paterson. The children know he is one of us.  He is a true role model.”

200-250 youngsters use the aquatic center daily, said McGuire. There are hours set aside for adults; and plans are in motion to slot in senior citizens.

Recognized at the ceremony were members of the traveling Boys & Girl Swim Team. Several young participants have set state records and participated in the New Jersey Junior Olympics.

“I’ve been on the swim team almost three years,” Brittany said. “Victor Cruz remembers his hometown and comes back. It’s encouraging to have someone important come back and remember his community.”

A sixth grader at the Christopher Columbus School in Clifton, Ashaly Dominguez, captured first place in the free-style at the Metro-League Championships. Although too young to have seen Victor Cruz play on television, the 11-year old said she was well aware of his accomplishments.

“I know Victor Cruz for his good work and also that he played football,” Ashaly stated.  “I want to swim in high school.  My dream is to, someday, make the Olympics.”

A state-of-the-art pool can help to make Dominguez’s dream into reality.

Alex Walcott, a third grader at the Haledon Public Schools, said his favorite event is the breaststroke. At just eight years old, the youngster has already participated in meets with the Boys & Girls team in North Carolina, Orlando, and Washington D.C., according to his mother, Marcia Lewis.