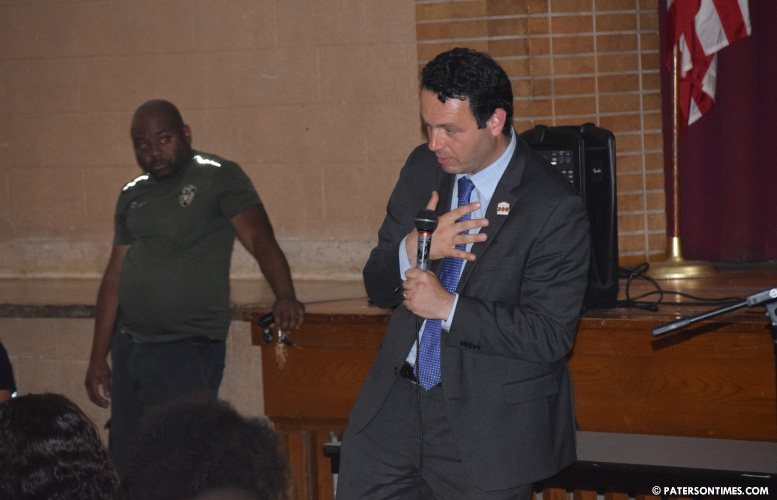 Clarence Thomas told the mayor he secured a new recycling bin from the city, but when he puts it at the curb his recyclables remain there at the end of the day.

“My issue is when I put it out they didn’t pick it up,” said Thomas. He had to switch to the old recycling bin for it to be picked up. “What was the reason?”

“I’m not quite sure why they wouldn’t pick up recycling in a new bin,” replied Sayegh. He relayed the question to deputy public works director Michael G. Jackson.

Jackson said recycling that’s contaminated by food residue or cardboard is not picked up. He said that may have been so in Thomas’ case.

Thomas wasn’t alone. For months, there have been complaints the city has been failing to collect recyclables. Sayegh’s social media page has received many complaints for months that recycling is not being picked up.

“Even when I put it out, it’s never regular,” said Brian Robinson speaking of irregular recycling pick-up by the city.

Besides recycling, some of the residents complained about slow police response to quality of life complaints.

Police chief Troy Oswald said quality-of-life calls are responded to within 40 minutes. His force has been thinned due to retirements, he pointed out.

“It’s very hard for us to be there 24 hours a day. We’re doing everything we can,” added police director Jerry Speziale.

Speziale said the dedicated quality-of-life cars assigned to each wards have been responding to loud music and other complaints.

Some complained about an increase in homelessness in the city. Sayegh said his newly hired chief innovation officer Edward Boze and health and acting human services director Oshin Castillo will devise strategies to combat homelessness.

Some complained about the heat at the auditorium. Sayegh kept the meeting to 60 minutes. He began by rattling off some of his key accomplishments in the first year.

Sayegh mentioned his administration’s move to change the city’s health insurance program to save millions every year. The change is being appealed by the police and fire unions.

Sayegh mentioned the creation of the new sewer utility. He also mentioned the new fee imposed on developers for construction plan review.

“We’re in the 1st Ward today. We’re committed to economic development. Every project we picked is in the 1st Ward,” said Sayegh referring to the $130 million tax credits assigned to various projects.

Sayegh cited the proposed visitor center at the Great Falls and the controversial plan to restore Hinchliffe Stadium.

“We have things going on at the falls, but I don’t see how that benefits North 1st, North 2nd Streets,” said Arthur Byard. He complained about lack of recreation for young people. “All we have is violence.”

Sayegh responded by saying his administration renovated the fields at Buckley Park for young people.

The mayor told the audience he did not want the meeting turning into a “venting session.”

Several longtime 1st Ward residents expressed their frustrations with the municipal government at the meeting.

Lynch said he has been hearing “yes” and getting a “smile,” but little has been done to address residents’ concerns.

Lynch had been complaining about tractor trailers cutting through Paterson Street to get to River Street. He said no serious steps have been taken to permanently resolve the issue. He also complained about proliferation of undesirable businesses like auto repair shops.

Another longtime resident, Patricia McNeil, said trees are not being trimmed.

“I really don’t think the city of Paterson cares about the 1st Ward. We have so many concerns that are not being addressed,” said McNeil.

McNeil often brings her concerns to the City Council, but the administration still fails to address the issues. She often has to bring the same issue to multiple meetings.

Sayegh said he is hosting the town hall meetings ahead of his state of the city speech next month.

Five more town halls are scheduled in the coming weeks: