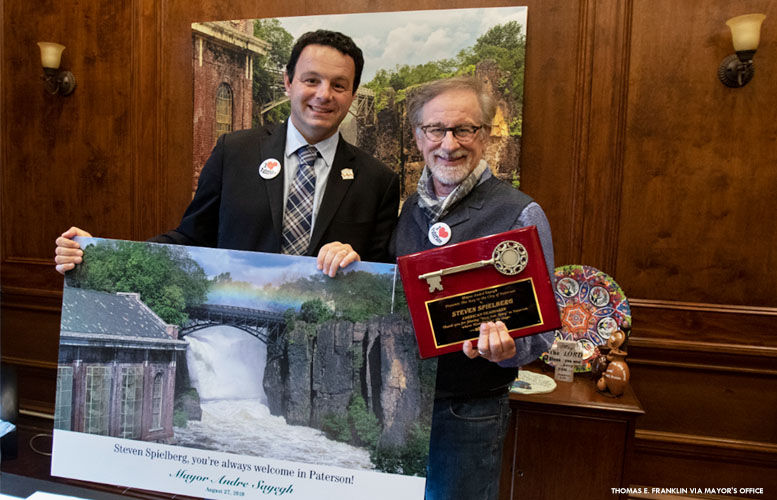 Legendary director Steven Spielberg was presented with the key to the city by mayor Andre Sayegh for filming the remake of the “West Side Story” in downtown Paterson.

Sayegh presented the key, highest honor bestowed by a city, to Spielberg, known for such classic films as “E.T. the Extra-Terrestrial,” “Schindler’s List,” “Saving Private Ryan,” and the “Minority Report,” in a private ceremony at City Hall on Tuesday.

Spielberg had been in the city shooting the remake when the mayor made the presentation. He has been filming the “West Side Story” for much of the summer. Downtown Paterson, particularly around City Hall, has been transformed into 1950s New York City.

“It’s not every day that we have an American icon in our city filming an epic movie,” said Sayegh. “That’s why we appreciate Steven Spielberg for picking Paterson and for his very generous contribution to improve our parks.”

Film company 20th Century Fox gave $30,000 to the city to protect its intellectual property and use the city-owned Ellison Street garage for filming, according to municipal records. Funds were split between the new Friends of Paterson Parks group and the Paterson Restoration Corporation.

Some local businesses and the Passaic County Community College also received contributions for allowing the film company to use their spaces for filming.

20th Century Fox received $6.85 million in incentives from the New Jersey Economic Development Authority (EDA) through the NJ Film and Digital Media Tax Credit Program to shoot the remake in the Garden State.

“His presence in Paterson has helped enhance our image and stimulate our local economy,” said Sayegh.