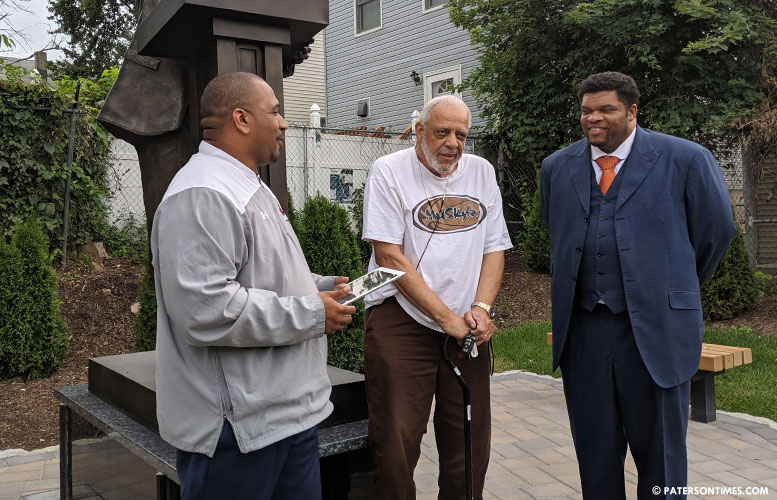 Both academies are housed at the old School 11 on Market Street and educate troubled students. Moody, who served on the Board of Education from 1991-2007, kept thousands of young people out of prison through a diversionary program.

Markel Brewington was one of those students Moody kept out of prison.

“How you been doing? What’s up man!” Moody, pictured in center, asked Brewington, who happened to be walking by the Martin Luther King, Jr. Park on Auburn Street and stopped at the press conference on Thursday afternoon.

“I’ve been working,” replied Brewington. He works as a food deliveryman, he said.

Both men chit-chatted about life and family.

Moody with his former student Brewington.

“Moody would sit down and have a deep talk with you,” recalled Brewington, 33. He was one of thousands to have gone through the Total Life Program over the years. “He’d try to get young people to change their lives. Give them guidance, give them feedback on things they are stressing about. You can talk to him about anything.”

Moody said the key to getting to the youngsters was “fairness.” He said he was always fair to the young people which garnered trust and respect.

Capers cited his work with troubled young people as the key reason to consider naming the school after Moody.

“We’re here to honor someone who has made it his career, dedicated his life, to better countless young boys and girls in our community,” said Capers.

“It’s just very humbling,” said Moody, 73. He never expected someone would consider naming a school after him.

Capers said he intends to introduce a resolution at the school board to rename the school. Moody’s son Zatiti Moody is one of the principals of the Great Falls Academy.

Some have argued a Board of Education policy requires a person to be deceased before a school could be named after them.

A district policy states special consideration is given to someone that’s deceased. It lists eight elements among them “deceased,” but does not state if an honoree must meet all eight.

Several speakers said they would like Moody to “smell the flower” while he is alive.

Capers argued Rosa Parks High School was named after the civil rights leader while she was alive.