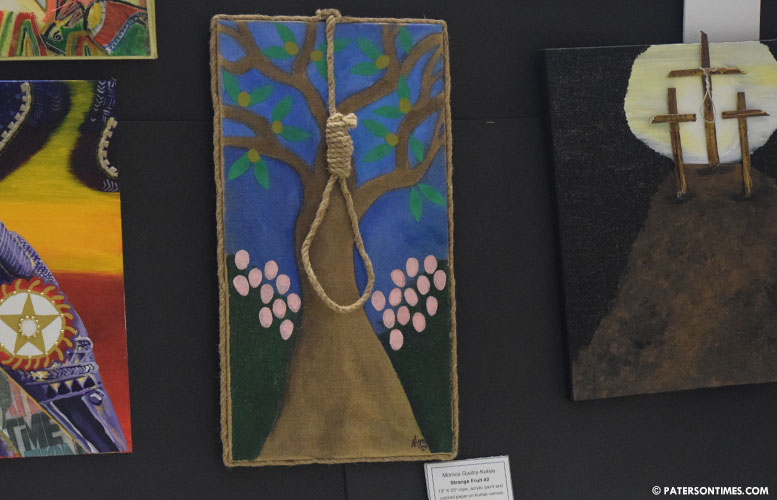 A pair of paintings featuring nooses on display at the Danforth Memorial Library has led to an uproar in the city’s African-American community.

One painting called “FYI Strange Fruit” by Walter Freeman shows a scared boy, a smiling woman, and a hanging noose; and another called “Strange Fruit #2″ by Monica Guidry-Kelsie depicts blank faces, a tree, and a large noose

“It’s horrible,” said councilwoman Lilisa Mimms, who is African-American. She received pictures of both paintings on Tuesday night. Both paintings are offensive and should not be on display at the public library, she said. “It’s disgraceful.”

“This is unacceptable especially for the Paterson community. It isn’t appropriate for any place especially a library. It sends the wrong message and should be immediately removed,” added activist Corey Teague.

Other black leaders defended the exhibit which has been on display since June.

“This here tells a story. It tells our story,” said activist Bilal Hakeem, who looked at the paintings at the library on Wednesday morning. “We were hung. We’re still being hung.”

“I’m not offended by it. It’s a reminder of the reality of this country — how they felt about us; what they did to us,” said Tracy Pearson, president of the Library and Museum Board of Trustees. “It’s from our own people. It just represents the history.”

The exhibit features 52 pieces by five black artists, said Doris Arnett-Gary. She is among the five artists.

Arnett-Gary said the group, made up of Howard University graduates, called “The Heavies” produces “thought-provoking art.” A sign next to the exhibit on the staircase wall states the group’s mission is to “awaken minds” and “foster social change” and “explore and celebrate the beauty in people of color and their cultures.”

“We’re socially conscious artists. We’re not here to offend or hurt or disregard people,” said Arnett-Gary. “We are here to shake you up and make you think.”

Arnett-Gary said the paintings that feature the noose are a graphic interpretation of the anti-lynching poem “Strange Fruit” by Abel Meeropol. The poem was later performed as a song by Billie Holiday.

Arnett-Gary said people are taking the two paintings “out of context.” Meeropol’s poem sits above the painting with the big noose.

The exhibit opened on Jun. 14, said library director Corey Fleming. He showed the paintings to a reporter on Wednesday morning. There are two separate displays. One on the staircase wall and a second when the visitor climbs the stairs and gets to the upper floor.

There were no complaints or criticism of the displays over the past three months, said Fleming.

“It’s not racist or anything. It’s African-American art,” said Fleming. “Every piece tells a story.”

“You don’t want to censor art,” said Errol Kerr, a member of the Library and Museum Board of Trustees. He said the exhibit depicts the cruelty of lynching.

Fleming said there was an opening held with the artists at the library in June. A press release was issued at the time, he said. The exhibit was going to be taken down in September, but was extended. He said an article covering the exhibit opening had stated it would be on display until end of September.

The paintings, which will remain up until next week, have price tags. For example, the painting with the large noose has a price of $500. Arnett-Gary sits on the Library and Museum Board of Trustees as an alternate representative of school superintendent Eileen Shafer.

No paintings have been sold so far, according to Arnett-Gary.

Fleming said the paintings will be taken down soon. He encouraged people to come to the Danforth Memorial Library and see the full exhibit before passing a judgment. 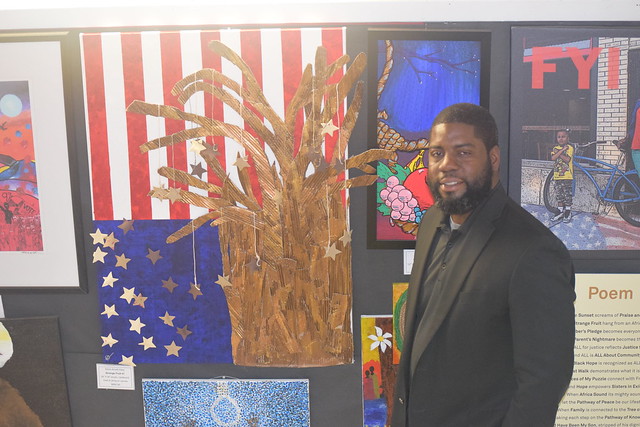