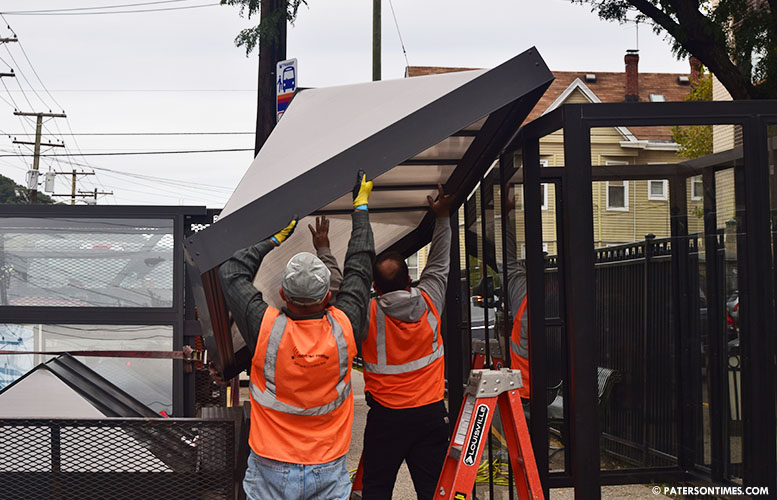 A small crew installed a new covered bus shelter in front of the Governor Paterson Towers, a senior housing complex, on 20th Avenue in Paterson on Friday morning.

Some senior citizens watched as the crew assembled the glass box, bolted down the shelter to the sidewalk, and lifted a roof over the structure.

“We fought for this for one and half years,” said Bill Priestly, head of safety at the Governor Paterson Towers. “This is beneficial for seniors to stay out of the rain.”

Priestly and Velez posing for a photograph in front of the new bus shelter.

Priestly said 960 seniors live at the towers. He said many of them use the New Jersey Transit buses to go to places.

The shelter will also benefit people who are not seniors and take the bus.

“I like the fact it’s larger than the last one,” said Christine Miller, who is not a senior. She lives at the Paterson Commons, across the street from the Governor Paterson Towers. She catches the bus twice a day from the location.

Marilyn Kohler, a contractor at the site, said the new bus shelter is 5 by 14, where as the previous one, which was damaged in a storm, was 4 by 9. Cost for the structure is around $12,000, according to one of the crew members.

Priestly credited councilman Luis Velez for working with New Jersey Transit to get the shelter at the location.

“It’s mission accomplished,” said Velez of the 5th Ward. He credited Priestly and other seniors for lobbying for the shelter. “The seniors will have a safe place to wait for the bus. It’s clean and presentable. It’s a safe haven for them.”

Velez said as the winter approaches the bus shelter will protect seniors from chilling winds and snow.

As the bus shelter installation wrapped up a pair of men — Jacinto Delgado and Santos Joaquin – tied to former school board candidate Ramon Joaquin, who is planning to challenge Velez for the 5th Ward council seat in next year’s election, appeared at the location.

Delgado behaved erratically while hurling insults at Velez in Spanish. Santos Joaquin, who is the father of Ramon Joaquin, accused Velez of having done nothing to get the bus shelter installed.

Ramon Joaquin had disseminated a letter claiming the “different doors” he touched paved the way for the bus shelter installation. In the letter, sent to seniors at the building, he claims to make a commitment to get the shelter installed before winter.

“He is taking credit for something he has never been involved in. I think he got the sources and fact from what I put out there,” said Velez. “He tried to take ownership. A person that starts like that, lying to people, what do you expect of him if he ever gets elected to office? He lied when he ran for Board of Education and he’s lying now. He has no credibility.”

On Friday morning, Ramon Joaquin said he reached out to Mario Recinos, to assist him in securing a bus shelter for the location.

Recinos went to the New Jersey Transit bus depot on Market Street in July. There he told transportation manager Jose A. Melendez the shelter had been vandalized and a replacement should be installed. He told the manager he is making the request on behalf of the senior citizens at the complex, according to documents New Jersey Transit released to the Paterson Times on Thursday.

Ramon Joaquin posted some of the correspondences between Recinos and NJ Transit officials on his Facebook, but erased the undersheriff’s name on the emails.

Recinos followed up again in August. He was told NJ Transit is waiting on a shelter agreement and resolution from the city. The shelter couldn’t be installed without the agreement and the resolution.

Velez shepherded the resolution and the agreement through the City Council on Jul. 30, 2019. He cites this as evidence to assert Ramon Joaquin is falsely claiming credit for the bus shelter installation.

“I’m not taking credit for it,” said Ramon Joaquin on Friday. However, his letter to seniors and social medial postings give the false impression he played a key role in securing the bus shelter. “My intention was to help those people.”

Ramon Joaquin’s name is not mentioned in the 36 pages of documents released by NJ Transit. Velez has provided evidence of his communications with NJ Transit officials.

When told Velez is accusing him of lying to the public, Ramon Joaquin said, “I don’t believe I am lying. If he wants to say I’m lying so be it.”

Santos Joaquin, who was head of the Paterson Progressive Movement, supported Velez in 2016. Both men have fallen out since then.

On Friday, police were called to the site. Velez told police both men were involved in disorderly conduct. Santos Joaquin and Delgado were being questioned by police at the location.

Priestly took pride in being the first person to enter the bus shelter after it had been assembled.