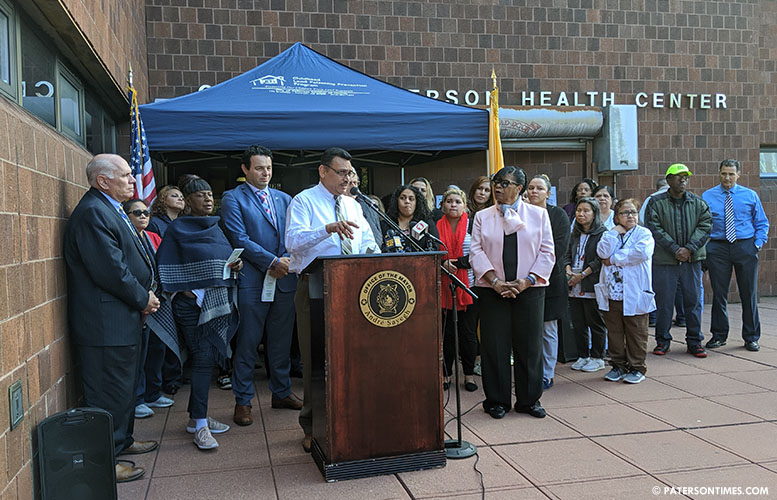 Mayor Andre Sayegh launched an initiative called “Knock the Lead Out” on Thursday afternoon to raise awareness about lead poisoning and halt childhood exposure to the toxic metal.

At the core of the mayor’s effort is a registry made up of properties containing high levels of lead. Children under six are extremely vulnerable to lead poisoning which can slow physical development and cause mental retardation.

“If you are a pregnant woman looking for a place to live, you can click on a button, and you know that may not be the place for you because there’s elevated lead levels in that dwelling,” said Sayegh.

There’s also a public awareness campaign to educate pregnant women and parents of young children about the dangers of lead exposure.

“What we’re doing is very simple. We’re trying to remove the exposure of kids to lead. How do we do that? By educating the parents,” said health officer Paul Persaud (pictured at podium).

The city’s Board of Health has created a small booklet to educate residents.

Sayegh said the city applied for a $25,000 planning grant to start the registry. After a plan is put together, the city will seek out other, bigger, grant sources, he said. He cited the situations in Flint, Mich. and nearby Newark. He described Flint as an “urban tragedy” that has taught municipal leaders a lesson.

“Paterson will not be Flint; we’re not going to be Newark,” said Sayegh.

Paterson like other old cities has a lead problem. Many homes were built before 1978, the year the federal government banned lead-based paint. Many of these old homes also have lead water pipes and plumbing fixtures.

The Passaic Valley Water Commission collected 306 water samples in Paterson between 2016-19 and found 28 samples had elevated lead levels — 15 ppb (parts per billion) or above.

Joe Bella, executive director for the Passaic Valley Water Commission, said his organization has been replacing lead service lines for more than three decades. He said the commission had 35,000 lead mains in its service area and now is down to the last 200 or so.

The problem exists on the homeowners’ side. As many as 14,000 properties in Paterson have lead pipes that connect to the street mains to move water into the homes, said Bella. It’s the responsibility of the homeowners to replace these pipes and any lead plumbing fixtures.

“This is where Paterson is going to help us,” said Bella. “We need to do more to get into homes.”

Bella said the Passaic Valley Water Commission has a program that charges homeowners $4,000 to $5,000 to replace the lead water pipes in their homes. He said homeowners can obtain a zero-interest loan and pay the amount over a 10-year period. A fee is tacked onto their quarterly water bill.

Bella said any homeowner in the service area can sign up for the pipe replacement program by calling the Passaic Valley Water Commission’s main number.

Rep. Bill Pascrell said he has been attempting to get a bill passed through the U.S. Congress for a $1.7 billion grant programs to aid municipalities and states in addressing the lead problem.

“We had it passed the house. It’s never passed the Senate,” said Pascrell.

Pascrell said people often do not recognize problems with air and water quality that can negatively affect their health.

“It’s going to save lives,” said Pascrell of the city’s effort.