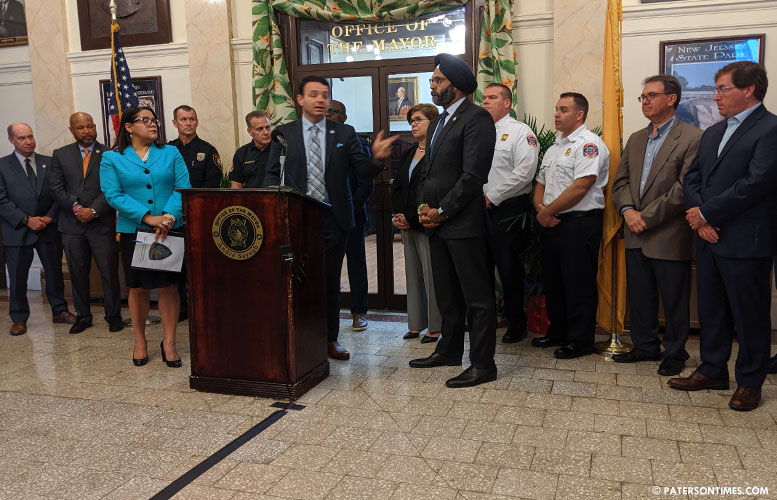 “Our traditional approach to this epidemic has not been working,” said Grewal in announcing $150,000 in grant funds for Paterson. “We tried to come up with a new, innovative approach that treats this crisis as what it is, not a law enforcement issue but rather a public health crisis.”

Grewal said teams will respond to overdose scenes day and night. Team members will provide on-scene support, information, and referral to treatment and recovery programs. He said the team will also conduct outreach to educate people about the dangers of opioids.

“We have a serious situation,” said mayor Andre Sayegh citing an episode of “Live Rescue” that featured Paterson fire responding to 12 overdoses during a two-hour period. “This is a fight we have to win.”

From Jan. to Sept. 2019 there are 20 fatal overdose deaths in Paterson, said Passaic County prosecutor Camelia Valdes. She said that’s down from 42 fatal overdoses during the same period in 2018.

“That doesn’t mean we don’t have much work to do,” said the prosecutor. “We should not rest on our laurels.”

Other cities getting funding for their own response teams are Newark, Camden, Trenton, and Toms River. State officials divided $749,999 received from the U.S. Department of Justice, Bureau of Justice Assistance to the cities heavily affected by the opioid epidemic.

“Even those numbers understate the scope of this problem because they don’t capture Narcan administrations done by family and friends at home and at ER setting,” said Grewal.

2,000 people were arrested on drug charges in Paterson last year, according to the attorney general.