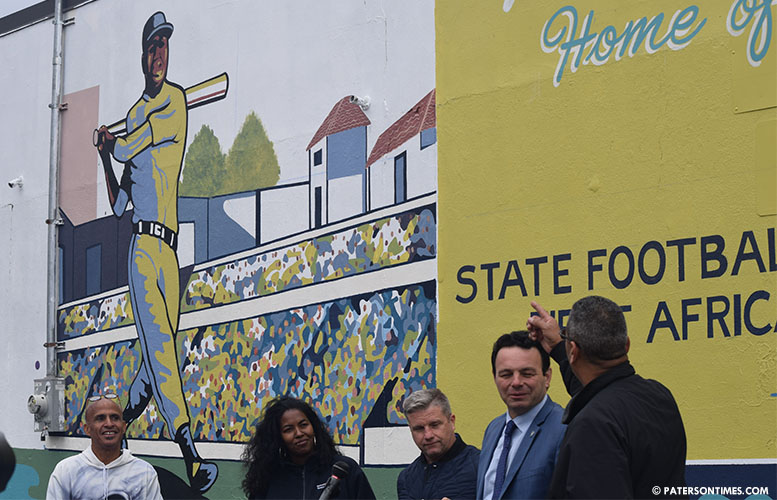 A 25-foot tall mural of legendary baseball player Larry Doby on the exterior of Hinchliffe Stadium was unveiled on Thursday morning.

Mural by a group of artists led by David Thompson of Halls That Inspire features Doby striking a ball during a baseball game at the historic stadium.

Thompson said the mural is 50-foot wide and 25-foot high. It took 34 people to complete, he said.

“It was a total community effort,” said Thompson.

Doby got his start in baseball at Eastside High School. He became a standout athlete at the high school. He played for the Newark Eagles in the Negro National League after attending Long Island University on a basketball scholarship.

Jackie Robinson broke the color barrier in the National League while Doby did the same in the American League, Sayegh pointed out, making Doby just as important as Robinson.

The mural took two weeks to complete, said the mayor. Thompson said the group had to scrape peeling old paint, double prime the site, and apply two coats of paint.

Both the New Jersey Community Development Corporation and the Paterson Public Schools supported the project, said Thompson. He is also responsible for the large mural within the footprint of the steam plant foundation at Overlook Park.

Sayegh said the mural enhances the appeal of the stadium for visitors.

Municipal officials plan to spend $76 million in state and federal tax credits to renovate the stadium which has been closed since 1997. The renovation is part of a bigger project that includes housing, a restaurant, and a parking deck in the vicinity. A Negro League exhibition will be housed at the stadium.

Construction is expected to begin in middle of next year. 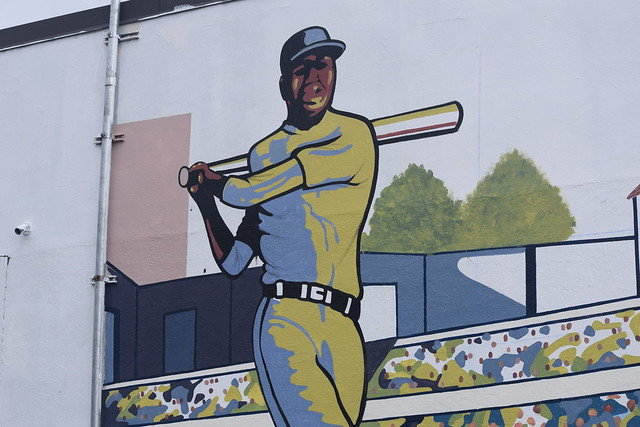