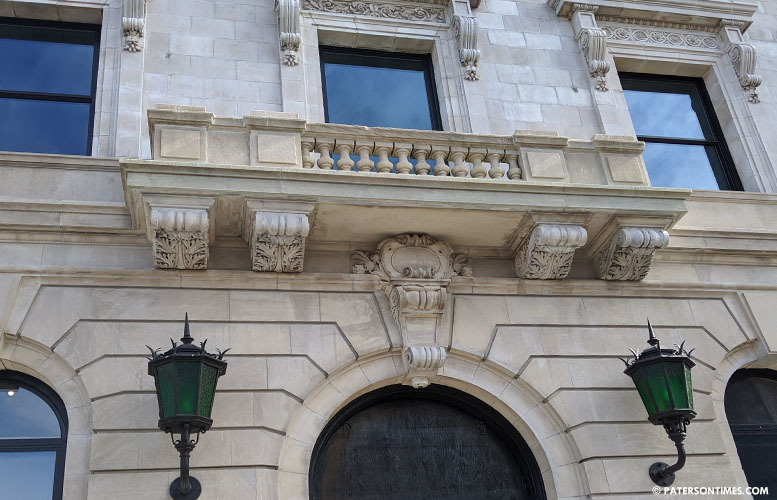 The former Paterson Police Station on Washington Street, a block away from the historic City Hall, has been meticulously restored to house office suites.

It took two and half years to restore the stately Beaux-Arts building, said Brian Drost, Jr. of Drost Properties, owner of the building.

“I was drawn to restoring the property back to its former glory both from a conservationist perspective as well as an economic one,” said Drost. “The bones of the building demonstrated craftsmanship and historical pedigree that are rarely available on the market and I believe the building is a symbol of Paterson’s resilience”

111 Washington Street has a long history. Peter Colt, a contemporary of Alexander Hamilton, built a residence at the site in 1813. Later, aldermen of Paterson acquired the building to serve as the first City Hall. The building housed government offices until the new City Hall was erected in 1896.

The building experienced the Great Fire of 1902. The building was later used as the Paterson Police Station. It experienced another fire in 1979, since then the building had been in a state of disrepair.

Years of neglect dulled the limestone Beaux-Arts façade of the building with soot build up. After multiple power washes, the façade has been brought back to its pristine state, said the developer.

The classical wrought iron staircase and the signature green police stations lanterns were reimagined and preserved.

“Those lanterns were original. We restored them and actually put the original green texture glass back in,” said Drost.

Lobby is adorned with custom paneling and marble stairs. There’s also a manicured courtyard with planting for a green oasis in middle of busy downtown Paterson.

The 25,000 square feet building has 12 office suites. The developer intends to cater to the emerging entrepreneurial, tech, medical, law, education and creative talents in the city. A portion of the building will have co-working space, favored by technology start-ups and entrepreneurs.

The building is located close to the Paterson Train Station and the Broadway Bus Terminal.

Drost Properties of Lodi purchased the building for $200,000 in 2016, according to tax records. This is the developer’s first project in Paterson.

Drost said the building that stands at 111 Washington Street was originally designed by architect William T. Fanning in 1905.

“His robust restoration project will have a tremendous impact on our development downtown,” said mayor Andre Sayegh speaking of Drost.

Drost said the building will have a grand opening on Nov. 4. It will be opened for both potential tenants and for visitors to tour the restored building.