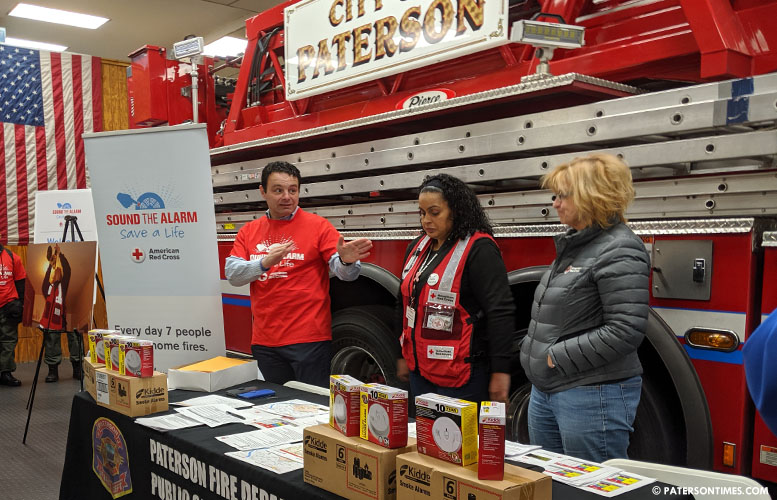 Elian Cruel was glad he opened the door when several American Red Cross volunteers knocked on the door of his North 4th Street home on Saturday morning.

“This one is ancient,” remarked Joe Bender, a volunteer with the American Red Cross, upon seeing an old smoke alarm mounted above the home’s front entrance door. It was also installed in a low position. A wall-mounted smoke alarm should be no more than 12-inch away from the ceiling because smoke rises, said a Red Cross volunteer.

Bender got on a stepladder and installed three smoke alarms in Cruel’s home. Each alarm has a life of 10 years.

“We can be more safe now,” said Cruel, 21, after the installation was complete. His parents were still sleeping when he opened the door and let the volunteers in.

Each smoke alarm has a $25 market value. Cruel parents saved $75 due to their son’s action.

Cruel’s family wasn’t alone in getting free smoke alarms installed in their home. 35 volunteers fanned out across the 1st Ward from 10 a.m. to 2 p.m. to install smoke alarms.

The Red Cross and its partners, including Paterson Fire Department, Habitat for Humanity, and realtors, installed 150 smoke alarms in 53 homes in Paterson on Saturday. 200 residents are living in safer homes as a result.

“We’re going to prevent them from happening in the first place,” said Taravella in a brief rally at the Northside Firehouse before the volunteers fanned out in the neighborhoods.

Deputy fire chief Frank Calamita said smoke alarms speed up response to a fire. There are typically more fires during this time of the year and into the winter, he said. People use alternative heating methods that increase risk of fire.

Taravella said the “Home Fire Campaign,” launched in 2004, installed 1.9 million free smoke alarms throughout the United States. More than 41,000 were installed in New Jersey homes as of Nov. 1, 2019.

640 lives have been saved in the country. That includes 18 people saved in New Jersey.

Taravella’s organization previously conducted a similar installation campaign in the 4th Ward. On Saturday, the American Red Cross had 875 smoke alarms and a target of 500 homes in the 1st Ward. The 4th and 1st Wards are two struggling parts of Paterson. Some residents did not open their homes for the free smoke alarm installations on Saturday.

Next year, the American Red Cross has a bigger campaign planned for Paterson. Taravella and mayor Andre Sayegh said the group and its partners will move to install 1,900 smoke alarms in Paterson in April 2020.