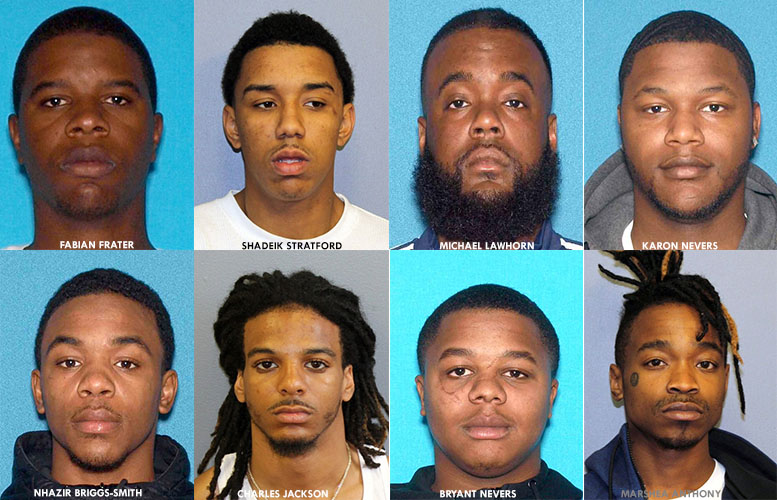 7 of the 8 are Paterson residents. Briggs-Smith lives in Elmwood Park.

Law enforcement agencies targeted a drug trafficking network based at 10th Avenue and East 28th Street in Paterson in a five-month investigation dubbed “Operation Icebox.” The network was led by the “So Icy Boys” gang, authorities said.

“In Operation Icebox, we dismantled a drug trafficking network run by a violent set of the Bloods street gang that was dealing large quantities of heroin,” Grewal said. “By putting these drug dealers behind bars, we stopped countless doses of heroin from reaching users across the region and we made residents safer by removing a criminal element that was driving gun violence in the neighborhood where they operated.”

Authorities said during those five months, two members of the gang were murdered. A third gang member was wounded when an internal dispute between members of the gang escalated into a shooting. Stratford pleaded guilty to the non-fatal shooting of the fellow gang member on October 27, 2018. The victim sustained three gunshot wounds.

“This is another example of the results we achieve when all levels of law enforcement work collaboratively to protect our residents and address the opioid epidemic that is devastating our communities,” police chief Troy Oswald said.  “Through investigations like Operation Icebox, we are dismantling the violent drug sets in Paterson that are major sources of heroin for the region.”

Frater, Stratford, Lawhorn, Nevers, Briggs-Smith, Nevers, and Anthony were sentenced at the Passaic County Courthouse by judge Sohail Mohammed on Friday. Jackson was sentenced by the same judge on October 11, authorities said.

Frater controlled the day-to-day operations of the drug ring, authorities said. He pleaded guilty to racketeering. He received a nine-year sentence with 7.5 years of parole ineligibility.

Stratford pleaded guilty to attempted murder. He received a 10-year sentence, including 8.5-year of parole ineligibility.

Lawhorn pleaded guilty to racketeering and was sentenced to five years in state prison with four years of parole ineligibility.

Nevers pleaded guilty to distribution of heroin. He received a five-year sentence with three years of parole ineligibility.

Briggs-Smith pleaded guilty to possession of a handgun and received a five-year sentence with 3.5-year parole ineligibility.

Jackson pleaded guilty to heroin distribution near a park and received a five-year sentence.

One individual, Jahvon Parker, 28, of Paterson, arrested in the course of the investigation, is awaiting sentencing.

Parker pleaded guilty to distribution of heroin in a school zone and faces six years in state prison.

“This proactive investigation, conducted in partnership with the Paterson Police Department, targeted a criminal organization that was fueling the deadly opioid epidemic and compromising the safety and security of city residents,” Veronica Allende, director of the Division of Criminal Justice, said. “We will continue to collaborate with law enforcement partners in Paterson and throughout New Jersey to fight drug trafficking and reduce violence.”