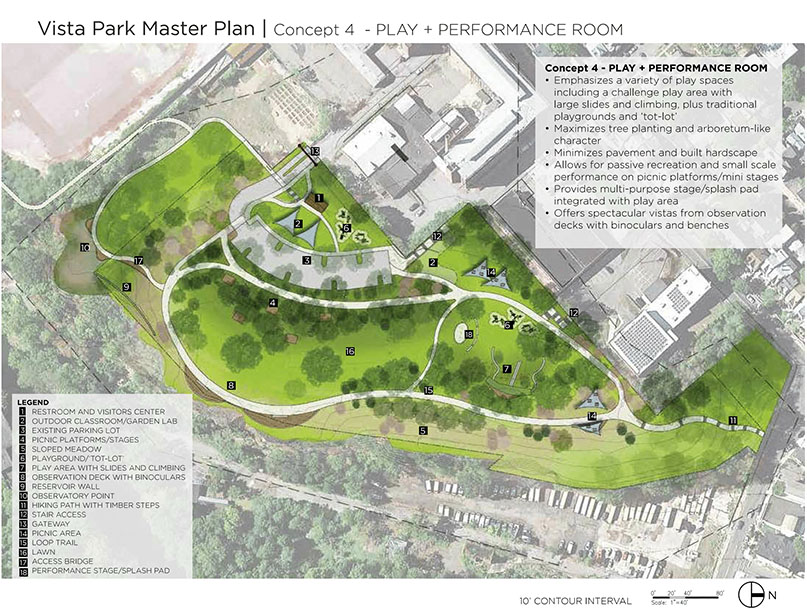 The city has secured $1 million in funding for improvements at the 8.5-acre Vista Park in the vicinity of the Great Falls, announced mayor Andre Sayegh last week.

Funds will go towards “revitalization, operation, and maintenance” of the park. No contracts have been awarded to expend the grant and loan funds secured through the New Jersey Department of Environmental Protection’s (DEP) Green Acres program.

Municipal officials had applied for $1.3 million in loan and grant funds last year.

A 120-page master plan was produced for the park by the Passaic County government. Four concepts were identified for the park. The fourth concept called “play + performance room” was selected through public input last year.

The fourth concept includes a visitor center and restroom, outdoor classroom or garden lab, picnic platforms and stages, playground, play area with slides and climbing, observation deck with binoculars, observation point, hiking path with timber steps, picnic area, loop trail, access bridge, and performance stage, according to details in a master plan that was funded by the National Park Service.

Vista Park falls outside the boundaries of the Great Falls National Historical Park. The 8.5-acre land is owned by the state government which saved the land from an unsightly housing development by buying it for $5.7 million in 2017.

Municipal officials subsequently entered into an use agreement to improve, maintain, and use the park. The new park is the biggest parcel of open space to open in the City of Paterson in 100 years, according to city records.