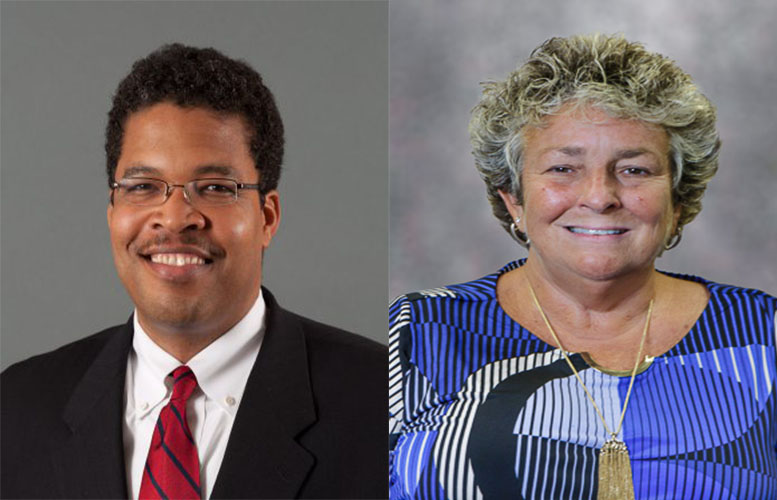 Campbell accuses Shafer of orchestrating his firing to keep him out of running for the superintendent’s job. He alleges Shafer worked with assessment, planning, and evaluation director Jazmin Rotger de Parra and former security director James Smith to “dirty his record” to “derail his application” for the district’s top job.

Campbell’s suit states the charges were “fabricated.” He gives his account of the incident in the suit.

On Dec. 1, 2017, at about 9:50 a.m., Campbell entered the office of assessment analysts Elizabeth Flores and Haifa Zahroon to ask de Parra about several state assessment collections — State School Aid Collection and State Assessment Registration Collection — that were due at the end of the day, according to the suit.

Collections were scheduled for a discussion with Shafer during status meetings at 10 a.m. and 2 p.m. The suit states de Parra appeared “flustered” and told him her team was working to correct “many errors” that still existed.

De Parra then began to leave the office; Campbell moved out of her way, but gently touched her arm to get her attention, according to the suit. Campbell then requested she provide him an update as soon as possible.

Furthermore, Campbell asked her as to whether Flores was assisting in the work to meet the deadline. De Parra, “unfazed, calmly,” told him a supervisor is assisting Zahroon in Flores’ absence, according to the suit.

De Parra then calmly left the room. The other two employees present in the office appeared “unfazed” by the interaction, says the lawsuit.

At 10 a.m., Campbell attended the meeting, but Shafer was not present. He alleges de Parra consulted with Shafer. His suit describes de Parra as a “close friend” of Shafer’s. Shafer attended the 2 p.m. meeting, but “abruptly cancelled” and asked Campbell about the status of ongoing projects like upcoming staff training sessions.

At 3 p.m., Campbell was called to Smith’s office where he was served with a letter from assistant superintendent Luis Rojas stating he was being placed on administrative leave with pay beginning Dec. 4, 2017.

Campbell learned de Parra had alleged he “forcibly grabbed” her arm to prevent her from leaving the office and that she filed a criminal complaint accusing him of assault.

Campbell’s suit states he was “shocked” and he “adamantly” denied the allegations. He states the district never sought his side of the story prior to suspending him. He alleges the district opened a “sham investigation” and collected statements from the three employees present at the office.

Campbell “was made the target of a bogus, discriminatory, administrative investigation which was used to disqualify him for the position of Superintendent, announced the very next day, because of his race,” alleges the suit. His suit states he had never been the subject of a complaint and had no prior poor performance or disciplinary history.

Campbell alleges Smith, who supervised the investigation, “inappropriately” appeared at municipal court hearings to “influence the outcome” of the case.

In Oct. 2018, the charge against Campbell were dismissed, according to the suit.

On Jan. 8, 2018, Campbell applied for the superintendent’s job. He states the criminal charge and the district investigation kept him out of consideration for the post. He claims his doctorate degree made him more qualified than Shafer for the job.

In Feb. 2018, Shafer was appointed superintendent.

Campbell complained the “improper and impartial investigation” violated his due process rights. His complaints were ignored by the district, according to the suit.

On May 15, 2018, Shafer informed him via a letter his contract would not be renewed for the next school year due to budget cuts. Campbell claims he was discharged “in retaliation for his complaints of misconduct while fighting the false charges.”

Campbell was hired by former superintendent Donnie Evans as chief data, accountability, and technology officer for $160,140 in May 2016, according to payroll records. He was put in charges of four departments, accountability, management information systems, assessment planning and evaluation, and technology. He received a “near-perfect” evaluation in his first year for improving data accuracy, use of data in the district, improving evaluation guides and training, and upgrading technology infrastructure in the district.

Campbell claims soon after joining the district, then-deputy superintendent Shafer, his direct supervisor, made him “feel unwelcome.” She did not make arrangement for him to have a “proper office,” he claims in the suit. He was assigned to work out of a “small, unsecured office” that did not have the same security as cabinet-level offices.

De Parra, Campbell’s subordinate, had the office that should have been assigned to him, states the lawsuit.

Campbell alleges in his lawsuit that Shafer “controlled employees through intimidation.”