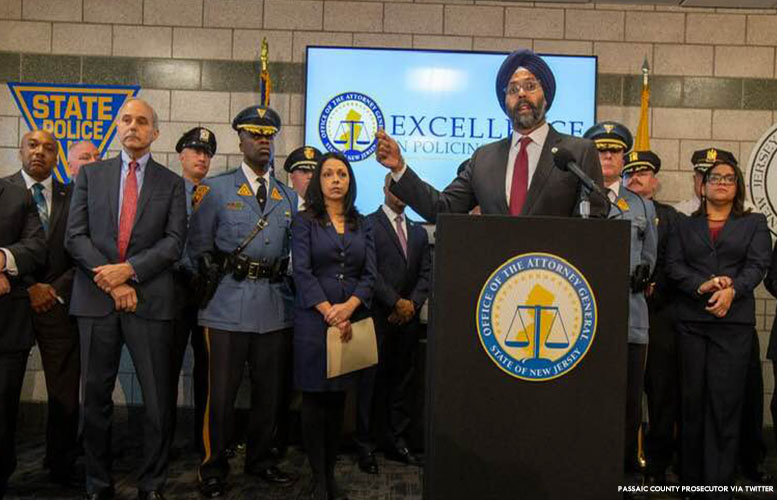 Six New Jersey police departments, including Paterson, have been selected to participate in a pilot program for the state’s new Police Use-of-Force Portal to improve police training and accountability while bolstering public confidence in law enforcement, announced attorney general Gurbir Grewal on Wednesday.

As part of the initiative police in Paterson, Bridgeton, Dover, Linden, Millville, and South Brunswick will transmit use of force data through a digital form to the new portal. These cities will “fine-tune” the portal and data collection process before the system is rolled out statewide.

“Our goal is to make sure that our use-of-force policy gives police the guidance they need to effectively and fairly protect public safety while maintaining their own safety and the trust of the communities they serve,” wrote Grewal in a letter to the six police chiefs.

Grewal’s effort is aimed at closing gaps in the uniformity of state police use of force data. Lack of uniformity in the state makes it difficult to confirm the accuracy of the data and draw correct conclusions, according to the letter.

“The Paterson Police Department welcomes the opportunity to participate in the pilot program to develop and test the Attorney General’s new police use-of-force portal and electronic reporting system,” said police chief Troy Oswald.  “We share the Attorney General’s commitment to accountability and transparency, and believe this system will result in greater uniformity in reporting and more meaningful data on use-of-force incidents. The trust of the community we serve is vital to our effectiveness. This new electronic reporting system—like the other initiatives being announced—will help us strengthen that trust.”

Oswald made it his aim to restore community trust in the Paterson police force. He has been credited with the arrest of seven police officers by the FBI for corruption. Two of them have been convicted.

Oswald was appointed by former interim mayor Jane Williams-Warren. He is being forced to retire by mayor Andre Sayegh through a settlement agreement.

The new portal is part of Grewal’s broader effort to reform policing in New Jersey. He unveiled a series of policies dubbed “Excellence in Policing Initiative” on Wednesday to bring sweeping changes to policing.

The key policies were outlined by Grewal’s office are:

“New Jersey has some of the finest law enforcement officers in the country, and our new initiative will help the Garden State maintain its position as a national model for policing in the 21st century,” said Grewal. “We’re promoting the culture of professionalism, accountability, and transparency that are hallmarks of New Jersey’s best law enforcement agencies, and we’re showing the rest of the country how we can build police-community trust while also protecting public safety. Our state’s 36,000 law enforcement officers deserve nothing less.”