New York woman to get $125,000 after falling, injuring herself at Eastside High School gym | Paterson Times 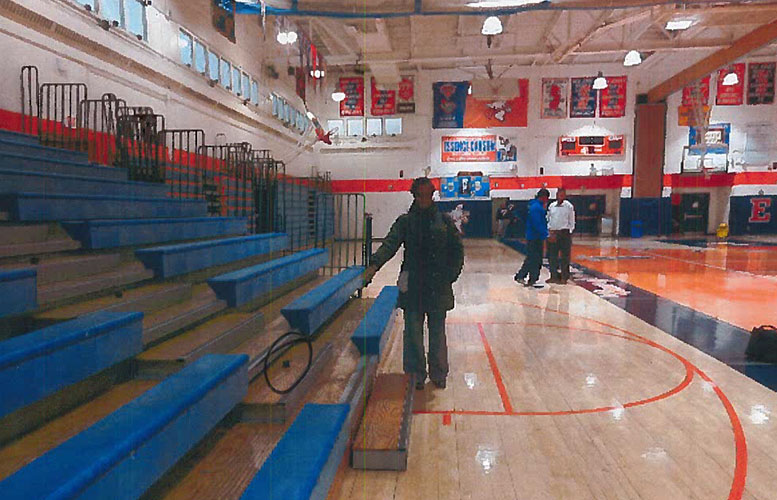 A New York City woman, who fell on the bleachers at the Eastside High School gymnasium and suffered serious injuries, is receiving $125,000 as part of a settlement agreement.

Nicole Byrd tripped and fell over a “protrusion” or “bracket” (pictured) on the bleacher stairs at the gym on Sept. 24, 2016. There were no handrails on the bleacher stairs. She had been attending an exhibition basketball game put on by the World Exposure Basketball, also known as New Jersey Sparks Athletic Club, according to court documents.

“I was in excruciating pain and could not move,” said Byrd in court affidavit testimony describing her immediate experience after the fall. “I required multiple surgeries for the injuries that I suffered that day.”

Byrd attended the game as a customer of the New Jersey Sparks Athletic Club which rented the gym to host its games, according to court records. However, she was never provided a receipt for the payment she made to the organization at the door, she stated in deposition.

New Jersey Sparks had its own people collecting money, running tables, running books, and keeping score, according to court records. Mention of a fee surprised school district lawyers, according to documents.

Byrd attended the game with her husband, daughter, daughter’s husband, and two-year-old niece.

School district’s outside law firm argued the protrusion at the stairs had existed for 12 years.

“The very fact that the allegedly dangerous condition existed for 12 years, in a gymnasium which was in constant use for those years, with no injuries or complaints resulting from same obviates the conclusion that the condition of the bleachers constituted a dangerous condition,” wrote Chryzanta Hentisz of Buglione, Hutton, and Deyoe.

Both sides in the case agreed to settle through mediation, according to court records.

School board members approved the settlement agreement on Dec. 18, 2019.

This report was updated on Dec. 19, 2019 with information that the school board has approved the settlement agreement.