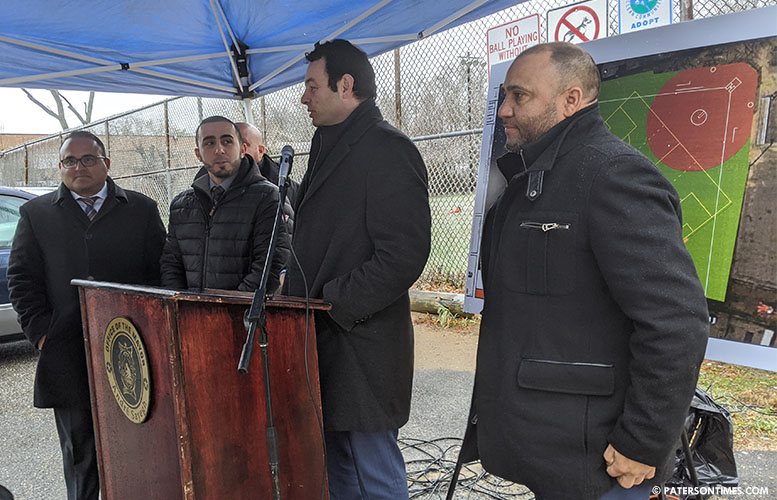 Mayor Andre Sayegh announced $1 million worth of improvements at Brandes Field in the Lackawanna neighborhood on Tuesday morning.

New bathrooms, fence, turf field for softball and soccer will be installed at the field, said the mayor.

“Parks are a priority in my administration,” said Sayegh. He described the current condition of the field on the corner of Marshall Street between Levine and Paxton Street as “deplorable.”

“You cannot imagine how happy we are. Finally, this is going to happen. We’ve been fighting for this for the longest,” said Yunior Fermin, whose league Costambar holds games at the field from May through November.

Fermin described the field as “bad” and “unsafe.” Ground is not level in the field and the bleachers are damaged, he said. He said last year a man broke his ankle playing at the field and required three surgeries.

Officials said funds for the repair work is from bond measures approved by the City Council.

“This is a win for South Paterson,” said Abdelaziz. He said residents of the 6th Ward can cross the street to Brandes Field in the 2nd Ward and have access to a “state of the art” field. “Our residents need to see and feel the upgrades.”

Abdelaziz said students of the Hani Awadallah School could use the field for recess and physical education.

The school uses Brandes Field for its field day, according to Murat Baycora, whose three daughters attend the school. He complained about the poor state of the bathrooms and beer bottles left in the vicinity.

Baycora, who is the cousin of deputy police chief Ibrahim Baycora, wanted the leagues and teams that use the field to clean up after their games. He said there should be penalties levied against them if they do not.

Sayegh re-assured him there will will be better maintenance of Brandes Field.

Municipal officials have yet to take bids or award a contract for the work. Sayegh anticipates completion of the work sometime in June 2020.