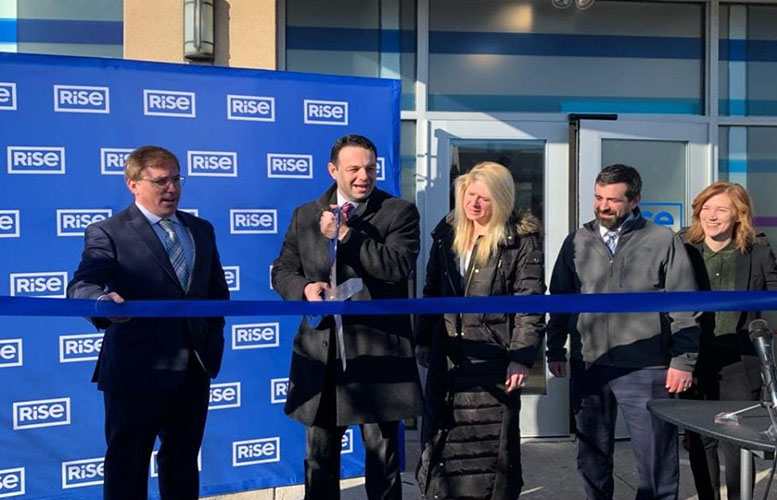 Municipal officials view the opening of the facility as the start of an industry taking root in a hardscrabble de-industrialized city where good jobs are scarce.

“It’s a victory on three different levels,” said mayor Andre Sayegh, citing local jobs, tax revenues, and access for people suffering from ailments, after cutting the ribbon on the new facility. “We believe this is just the tip of the iceberg for jobs and financial benefits for our residents connected to the medical cannabis industry.”

11 of the 13 jobs created by Green Thumb Industries (GTI), the firm running the dispensary, were filled by Paterson residents, said Devra Karlebach, chief executive officer for GTI. She said full-time jobs have a median wage of $45,000 with benefits.

Karlebach said the dispensary will begin serving customers on Saturday.

Sayegh said the municipal government will collect 2-percent tax on sales of products at the facility. His administration is expected to present an ordinance to the City Council next month, said the mayor.

Economic development director Michael Powell said the lowest performing dispensary in New Jersey brings in $3 million in sales. And the highest is pulling $19 million in sales. He said there’s potential for significant tax revenues from the 2-percent tax.

GTI has also opened a cultivation facility in the Bunker Hill section. It had faced opposition to opening a growing facility on the corner of Madison and Getty. Karlebach and her team listened to the local community and opted to re-locate the cultivation and processing facility.

First harvest is expected in matter of months. For the first four months, GTI will source marijuana from Belmar-based Curaleaf.

“It’s going to be great for patients,” said Brown. This is the seventh dispensary in New Jersey, according to the state. He said this is the first in Passaic County. “It’s huge for Paterson. It’s huge for North Jersey. We’re really committed to expanding access to medical cannabis.”

Six medical marijuana dispensaries were approved by the state last year. This is the first one to open, said officials.

Some of the residents hired by the firm were happy to be working for the company.

“I love it here,” said Taj Liebermann, a supervisor. He said the firm has “high aspirations for the future.”

Liebermann was impressed by the company’s management. Soon after being hired, he interacted with the head of the company via email, he said.

“We know our community. We know how to work with them and how to help them,” said Khaled Ahmed, another resident hired by the firm.

GTI has 36 other stories throughout the United States.

“We are honored to bring jobs and tax revenue to Paterson and to New Jersey and look forward to being active, involved members of the community,” said Ben Kovler, founder of the company.