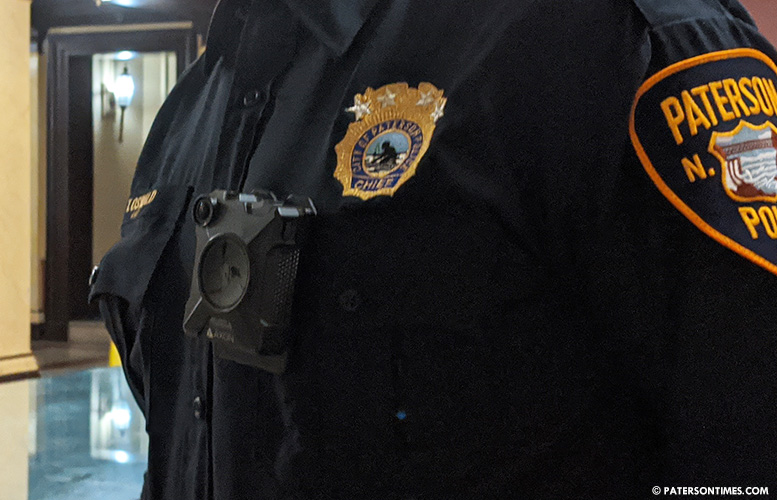 One hundred and fifty body cameras are being purchased by the city to equip all patrol officers in the Paterson Police Department by March of this year.

Police chief Troy Oswald expects patrol officers to be wearing bodycams by mid-March. He said officers will be provided training on use of the devices over a three-day period. On Tuesday night, the chief passed around a body camera to members of the City Council for their inspection.

Council members will have to approve a five-year contract worth $581,829 to Axon Enterprise Inc. of Scottsdale, Ariz for the cameras. It translates to $147,669 for the first year and $108,540 every year thereafter, according to government records.

Under the contract, the city will receive hardware upgrades every three years.

“Every three years we will get new cameras,” Oswald told the council.

Oswald told the council each camera will be assigned to a specific officer. When an officer finishes his shift, he will place the camera on a docking station that will charge the device and upload the footage to a secure cloud server. He said patrol officers and shift supervisors will be first to get the cameras. However, other units, like the traffic division, will not.

There are 374 police officers on the force, said the chief.

“It should be across the board,” said Al Abdelaziz, 6th Ward councilman. “Why can’t we use this per shift?”

Oswald said it requires eight hours for the devices to charge and upload captured footage to the cloud. He said assigning the same device to multiple police officers presents a logistical nightmare because the outgoing officer has to be de-registered and the incoming officer registered to that device.

“The logistics of it is just about impossible,” said Oswald.

Council members wanted all the officers equipped with cameras.

Michael Jackson, 1st Ward councilman and chairman of the public safety committee, wanted the Narcotics Unit to be equipped with cameras.

“I don’t think it’s a huge expense,” said Jackson. He pointed out the city spends hundreds of thousands of dollars every year on police brutality lawsuits.

Oswald told council members its sensible to expand the number of cameras every year to ultimately cover all officers in the department.

Oswald said the bodycams are regulated by New Jersey Attorney General’s Guidelines. Attorney general Gurbir Grewal and his predecessors have promulgated guidelines for body cameras over the years.

For example, Grewal two years ago issued a directive that requires police to release bodycam and dashcam footage to the public. Officers are required to activate their cameras when conducting searches, making arrests, questioning suspects, and conducting frisks for weapons, according to a directive issued in 2015.

A person is able to request an officer to stop recording under the guidelines.